Man oh man, it’s been quite a couple of days eh? On Monday’s WWDC 2009, Apple announced updates to their MacBook line up, Snow Leopard, and introduced the iPhone 3GS.

Well, yesterday Rogers finally announced the iPhone 3GS on its website, and Fido as well! We all thought Fido would not be selling the latest iPhone as it has become a “low cost carrier”. I guess that has changed because if people desire the latest iPhone, they will pay anything to get it (the 6GB/$30 data plan is back too)!

Regardless, Rogers was a day late in announcing any official news about carrying the iPhone. We only could read tweets by their official Rogers spokesman, Keith McArthur. You gotta feel for the guy as he’s been bombarded by hundreds of tweets, yet all he can respond is with the vague company line. 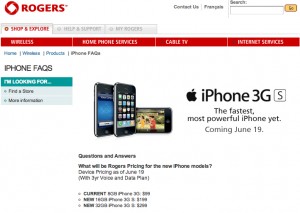 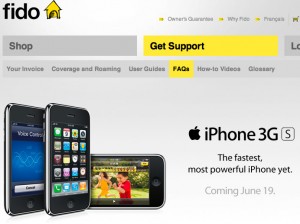 Upon hearing about the iPhone 3GS being announced and seeing that Rogers logo on the WWDC presentation screen, Canadians started to wonder: How am I going to get the iPhone 3GS if I’m already on a 3 year Rogers/Fido contract?

If you are on a contract, you will not be eligible for a Hardware Upgrade (HUP) until you are at least one year into a contract–or is it 24 months? Rogers’ policy on early HUPs has been to inform people that the iPhone 3GS will be available for a non-contract price. How much? They won’t say until we are closer to the June 19th launch date.

We will be writing a definitive Rogers/Fido iPhone 3GS upgrade policy guide coming soon–watch for it! Are you going to upgrade to the iPhone 3GS? If you’re in a contract, how many months in are you?