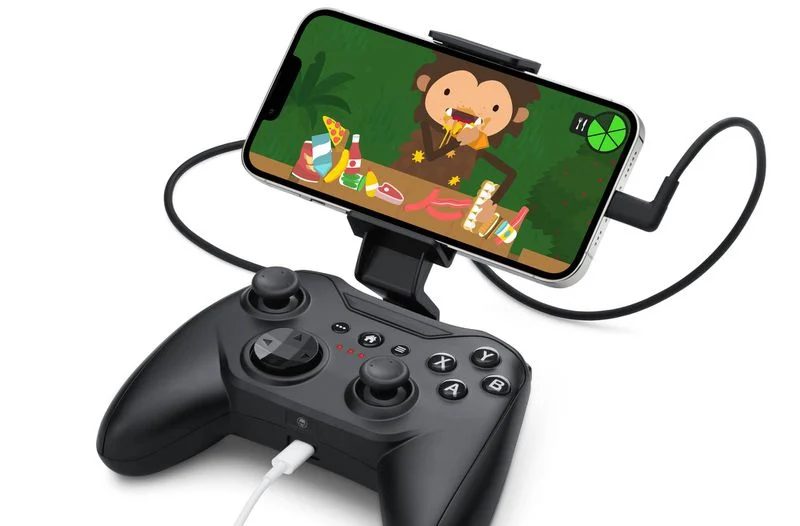 According to MacRumors, Apple now sells a new revision of the Rotor Riot game controller for mobile online at the Apple Store. The updated design adds ‘Home’ and ‘Options’ buttons to the controller.

Like the previous iteration, the controller is designed exclusively for use with the iPhone and iPad, with a dedicated Lightning connector.

A wired Lightning connection allows for lower latency, eliminates the need for the controller to be wirelessly paired with a device, and makes it so the controller can draw power directly from a connected device and doesn’t need a battery of its own.

Of course, users wouldn’t have to deal with wireless controllers and their inherent latency (or pay a premium for compatible accessories) if Apple simply ditched Lightning on the iPhone and iPad for USB-C, like the EU wants it to.

The newest revision of the controller also comes with an optional “Zero Gravity device holder” in the box, which can be used with an iPhone 6 and newer. A full list of compatible devices is available on the controller’s Apple Store product page.

The updated Rotor Riot is advertised as the only full-sized, Lightning-connected game controller available for the iPhone and iPad, and also features a built-in Lightning connector for pass-through charging of a connected device during use.

Other gaming controllers for iPhone, iPad and Apple TV, include this one we reviewed from Steelseries.

The Rotor Riot Lightning-connected game controller for iPhone and iPad is currently available on Apple.ca for $69.95 CAD  — get yours today.