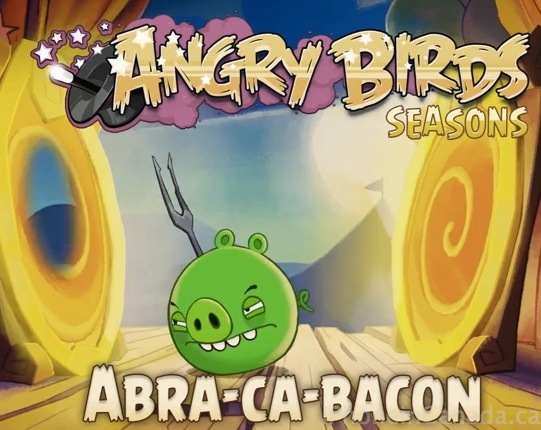 Rovio Entertainment has pushed its new ‘magical’ update to the Angry Birds Seasons game today i.e Abra-Ca-Bacon, which is based on the theme of magic and marks the first release from Rovio’s new studio in Stockholm. The free Angry Birds Seasons update is now live in the App Store for iOS and on Google Play for Android, with PC and Mac OS X versions due out in the coming weeks.

Abra-Ca-Bacon is a free Angry Birds Seasons update that’s full of surprises. We’re extremely dedicated to giving our fans more of what they love, which is why we keep adding fun new levels to our games with features you might not expect.

This update has 30 extraordinary new levels set in a magical circus world – with six more bonus levels to unlock. But check this out. We’ve also introduced Magic Portals, which is a totally new and exciting gameplay element that lets you teleport birds, pigs and just about anything else from one portal to another!

To celebrate this first release from its Stockholm studio, Rovio teamed up with Simon Pierro, the iPad Magician, who made the following Abra-Ca-Bacon magic video: