Rural Internet Gets Faster, But Still Behind CRTC Speed Target for Canadians: CIRA 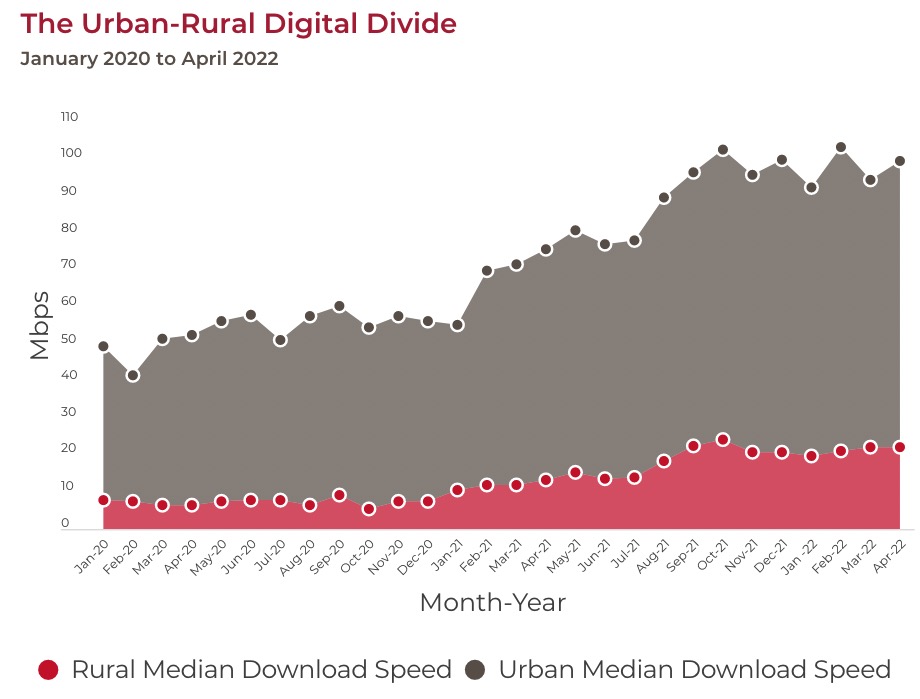 CIRA’s latest release focuses on test data collected over 2021, and the first quarter of 2022. Among Canadians who ran a CIRA test, the fastest speeds were reported in urban Newfoundland and Labrador, British Columbia, and Nova Scotia; rural Alberta, Saskatchewan, and Prince Edward Island reported the slowest.

While the median download speed for rural areas has increased slightly from previous years to 20.9 Mbps in Q1 2022, in urban areas it has increased at a far greater rate, almost doubling since the start of the pandemic, to 74.61 Mbps.

In Q1 2022 the median download speed in Newfoundland and Labrador hit 84.5 Mbps, nearly 60 Mbps faster than it was in Alberta, which recorded a speed of 25.1 Mbps. Newfoundland and Labrador also held the fastest median download speed in 2021 at 65.3 Mbps, slightly over 50 Mbps faster than Saskatchewan’s, with a meagre 14.7 Mbps.

The data was gathered using CIRA’s Internet Performance Test. Since the launch of the program, Canadians have completed over 1,200,000 tests.

Dropbox support has just confirmed that a public beta with full support for macOS will be released in Q4 this year, making the desktop app fully compatible with macOS 12.3 (Monterey). Dropbox users on macOS 12.3 see a compatibility warning about the Dropbox system extension, which results in users being unable to open online-only files stored...
Usman Qureshi
7 hours ago

WhatsApp has simplified the process of setting up Disappearing Messages by allowing users to set default Disappearing Messages for new and existing chats all at once. Users can now choose their duration timer and then select and apply it to whichever chats they want. For those who aren’t familiar, WhatsApp lets you send messages that disappear...
Usman Qureshi
7 hours ago