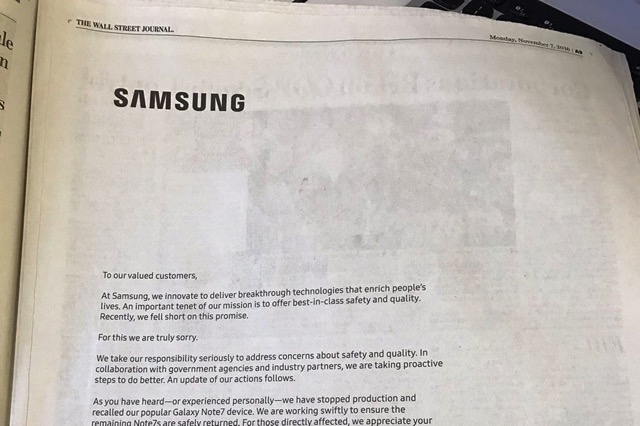 As pointed out by The Verge, Samsung has run full page apology ads over the Note 7 recall in three major US daily newspapers i.e. The Wall Street Journal, The New York Times, and The Washington Post, in an effort to restore some consumer goodwill. The letters are signed by Gregory Lee, the president and CEO of Samsung Electronics North America, and are aimed at English-speaking consumers, according to The Korean Herald.

“An important tenet of our mission is to offer best-in-class safety and quality. Recently, we fell short on this promise. For this we are truly sorry,” the ad reads. “We will re-examine every aspect of the device, including all hardware, software, manufacturing and the overall battery structure. We will move as quickly as possible, but will take the time needed to get the right answers.”

Samsung released its flagship Galaxy Note 7 back in August, which suffered from critical flaws in its design that led to overheating and battery exploding incidents. The company initially recalled millions of units in early September, but permanently discontinued the handset a month later. Samsung says nearly 85% of all devices have been returned already.

Samsung’s ad also mention issues with the different models of its top-load washing machines that have also forced another embarrassing product rollback. Take a look at one of Samsung’s apology letters published in the U.S. newspapers below: 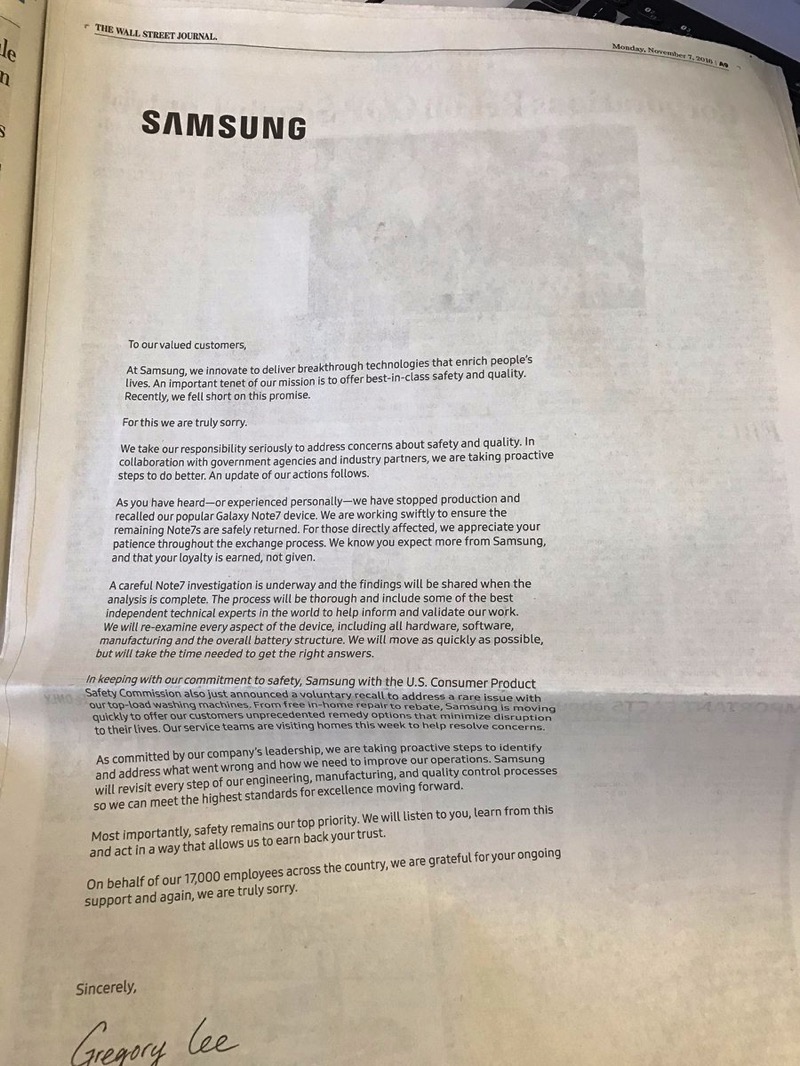 Today, Samsung has revealed the Galaxy S23 series of devices. During its annual keynote, the company revealed details on the new flagship devices encompassing the Galaxy line. This year, Samsung is pleased to announce the Galaxy S23, Galaxy S23+, and the premium Galaxy S23 Ultra. The new series of Galaxy phones iterates on its predecessors...
Steve Vegvari
5 mins ago

Samsung’s annual Galaxy Unpacked event was held today, showcasing a new lineup of devices. Of course, while the company’s new Galaxy S23 series of smartphones were revealed, Samsung took time to reveal the new Galaxy Book3 laptops. This year sees the launch of a lineup of fresh premium PCs from Samsung. Samsung is launching four...
Steve Vegvari
6 mins ago

Last July, Tim Hortons proposed a free hot beverage and one free baked good, as a settlement in the privacy class action lawsuit involving the coffee chain’s mobile app. Fast forward to today, this free coffee and donut offer has been court approved, according to an email sent out to those involved and received by […]
Gary Ng
7 mins ago