According to a renowned South Korean newspaper The Chosun Ilbo, Samsung vs. Apple battle has come to a hold as the former has decided not to  block iPhone 4S sales in South Korea. iPhone 4S was launched last Friday in the region and Samsung was looking to take a legal action in an attempt to block its sales but something has eventually changed their decision, as reported by 9to5Mac. Samsung has issued a statement they they will not be filing an injunction on iPhone 4S sales on their home soil. 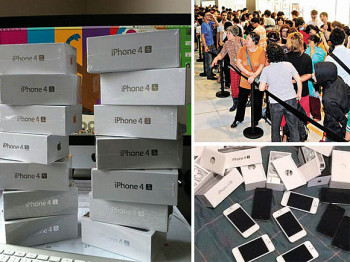 Deciding whether to take a legal action against Apple in France, Italy, Australia and Japan, Samsung executive told the press:

We concluded that we should engage in legal battles with Apple only in the global market, but not in order to gain more market share in Korea.

We are still not clear as to what actually changed the Korean electronics giant’s mind but we do know that despite the ugly public brawl between the two technology leaders, Samsung will however manufacture the A6 chip for Apple’s next generation iPhones and iPads. Could this be the reason for Samsung’s sudden change of heart?

The operating system (OS) for Apple's long-rumoured mixed reality headset is now reported to be dubbed "xrOS." This naming convention comes following reports that Apple was naming its AR/VR headset OS "RealityOS." In a report from Bloomberg, Apple's new naming convention appears to have come out of nowhere. However, the report goes on to state...
Steve Vegvari
46 mins ago