As the second Apple vs Samsung trial continues, today some interesting testimony came from a Samsung designer in regards to allegations the latter copied the iPhone’s ‘slide-to-unlock’ feature, reports Re/code:

Did Samsung steal its slide-to-unlock feature from Apple’s smartphone software?

“Absolutely not,” said Samsung senior UI designer Youngmi Kim, who has worked on user experience strategy on the Samsung design team since 2004.

“If we were to work on the same thing as Apple, that would not give us any advantage in terms of differentiating our products, so that would not make any sense,” Kim said, speaking through a translator.

Kim was shown two uncovered internal Samsung documents which suggested the company needed to make its smartphone unlocking gestures similar to the iPhone. Check them out below: 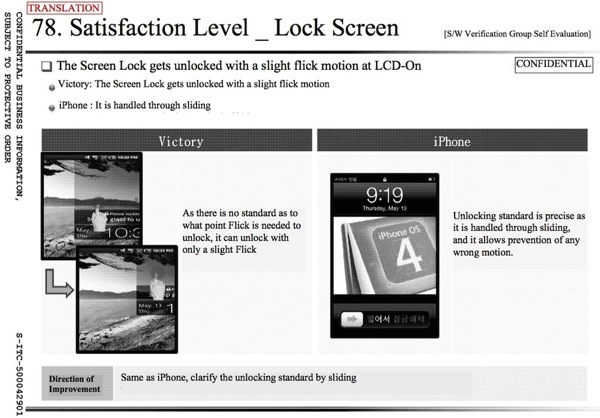 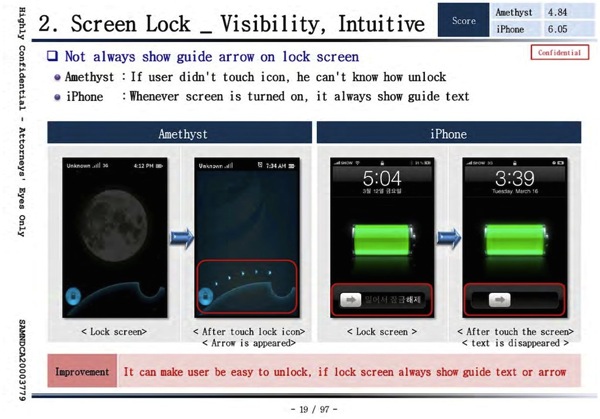 Also today, Samsung’s chief marketing officer Todd Pendleton took to the stand, where he says the company’s success came from their marketing spend and the fact their phones were better than the iPhone—but people didn’t know about it yet, reports the NY Times:

At the time, Samsung was still No. 4 in the market, behind Apple, HTC and Research in Motion, now called BlackBerry. Mr. Pendleton said he had to build a marketing plan from scratch. He said he decided to build a brand around the idea that Samsung would stand for “relentless innovation” by shipping the best hardware on the market before anyone else.

Eventually Samsung began a marketing campaign called the Next Big Thing, which aggressively mocked the iPhone while promoting Samsung devices as the best on the market.

Samsung’s phone sales grew quickly. In 2012, sales of Samsung’s Galaxy S III surpassed the iPhone for a short period, making it the best-selling smartphone in the world.

When asked whether Samsung plotted to surpass Apple, Mr. Pendleton said: “Our goals at Samsung are always to be No. 1 at everything we do. To beat everyone.”

Apple lawyers brought up a previous email written by former Samsung executive Dale Sohn, which read “Beating Apple is no longer merely an objective. It is our survival strategy,” and showed it to Pendleton. The email also said “There will be a tsunami when iPhone 5 is coming,” which Samsung said it needed to an immediate response.

Pendleton said Samsung usually experiences a dip in sales prior to iPhone launches and acknowledged the company had a specify plan in place, which turned out to be those “Next Big Thing” ads mocking the iPhone and its users.

Apple is looking to have Samsung pay $2.19 billion for its sales of 37 million devices which the former alleges infringed on five patents from August 2011 to December 2014. Samsung is countersuing Apple for infringing on two of its patents.