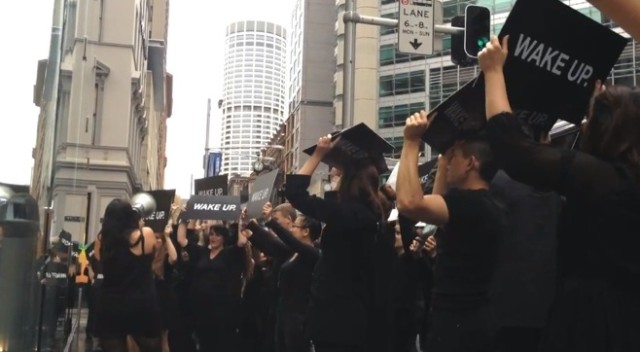 A few days ago we heard about an awkward protest outside the Sydney Apple Store by a group of people dressed in black and shouting ‘wake up’. Many were quick to allude the stunt was the brainchild of Samsung but the company later denied any involvement to SlashGear:

Samsung Electronics Australia has nothing to do with the ‘Wake-Up Campaign” the company told SlashGear today.

Now, MacWorld has dug up some info that now assumes RIM as the possible company behind the flash mob protest, based on code from the Wake Up page that leads to the Google DoubleClick ID of RIM Australia. An AppleInsider forum user also noticed the same code:

James Croft, from our Mactalk Podcast, and our sister website, looked through the source code of the Wake Up page and spotted something interesting:

This bit is relevant:

That SRC value is a Doubleclick account identifier. Throw that back into Google:

…and you get a bunch of hits on the RIM AU website.

Adding further fuel to the fire is the YouTube user Blunty who just ‘happened’ to be there and record the entire event. It turns out Blunty has previously done some work for RIM, a multi-episode glowing review of the PlayBook.

So is RIM really behind the ‘wake up’ protest? If they are, I’d be shocked. Shouldn’t they spend their resources on releasing an actual smartphone people want to buy?

Update 1: RIM admits it was behind the flash mob, in a PR statement to MacTalk:

“We can confirm that the Australian ‘Wake Up’ campaign, which involves a series of experiential activities taking place across Sydney and Melbourne, was created by RIM Australia. A reveal will take place on May 7th that will aim to provoke conversation on what ‘being in business’ means to Australians.”

Boom. Thanks for coming clean, RIM.