OMG, Samsung Displays iOS Icons On Its Wall At A Samsung Store?

It doesn’t get any more embarrassing than this! While Samsung vows to heat up its ongoing “war of the patents” with Apple, its advertising department seems to be using their rival’s trademarks on a wall of its own display center. In a photo (shown below) of Samsung’s shop-in-a-shop in Italy’s Centro Sicilia, you can see the arrows pointing out Apple’s trademark iOS icons for mobile Safari browser and App Store at the big Samsung wall of apps intended for Samsung Galaxy Ace advertisement. 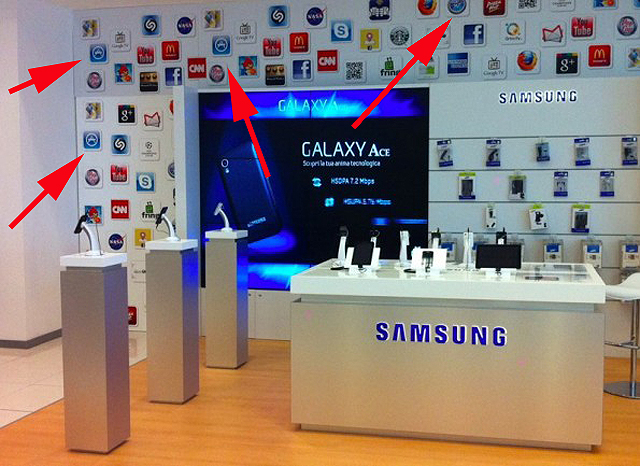 Embarrassing, particularly given Apple’s allegations that Samsung “slavishly” copied the design of its iPhone and iPad devices. It’s hard to imagine there’s a reasonable explanation for this. Samsung phones don’t support iOS apps and I can’t imagine Apple is making the company a version of Safari.

Even though it’s likely that this was a display left over from some other event but since Samsung has not yet responded to our source’s request for comment, it seems the Korean company definitely needs to clean up its own operations before raising a finger at the Cupertino giant for using its intellectual property.