Samsung Files For 5 Times More Patents Than Apple in 2013, Shifts to Focus on Patent Trolls in 2014

In May 2013, Samsung opened a new patent business in Washington called Intellectual Keystone Technology (IKIT). Around the same time, it was reported that Samsung sarcastically stated that their “legal battles with Apple encouraged them to invest in more patents,” which turned out to be true.

The image from the report, shown below, shows that Samsung has filled 5 times more patents that Apple in 2013. Throughout the year Apple filed 4,282 patents while Samsung filed 22,300 patents with the U.S. Patent Office. 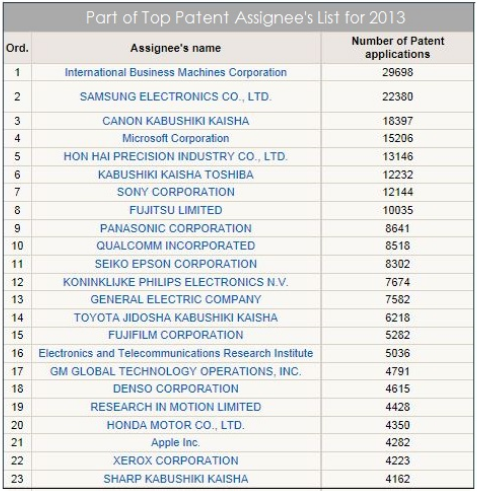 In 2013 Samsung was quoted as saying that, “Companies should be paying licensing fees for patents. We are paying to platform providers such as Microsoft in return for using their patents.”

Samsung’s patent propaganda war against Apple has included getting their minions pounding the table in articles and in forums that Apple is a patent troll when in fact Samsung is the one that has filed more than 5 times the patent applications in 2013 than Apple had and is now supporting IKIT to be a patent troll or non-practicing-entity (NPE) in 2014 according to their own Country’s press that usually protects them.

As a new year begins it is clear who has filed more patents in 2013 and who intents to hide behind IKIT as a patent troll. Samsung has made it very clear that companies should be paying licensing fees and in 2014 they intend to pursue this plan.