Starting with iOS 8 and OS X Yosemite, Apple introduced the Continuity and Handoff features that allow users to do things like picking up and initiating phone calls from within OS X, even when their iPhone is across the house. Of course Palm’s webOS used to have a similar feature, which may have inspired Apple, but the last time we checked, Palm no longer exists as a company. And Apple, without a doubt, has now taken the feature to a whole new level, as more and more devices, including the new Apple Watch, start taking advantage of the feat. 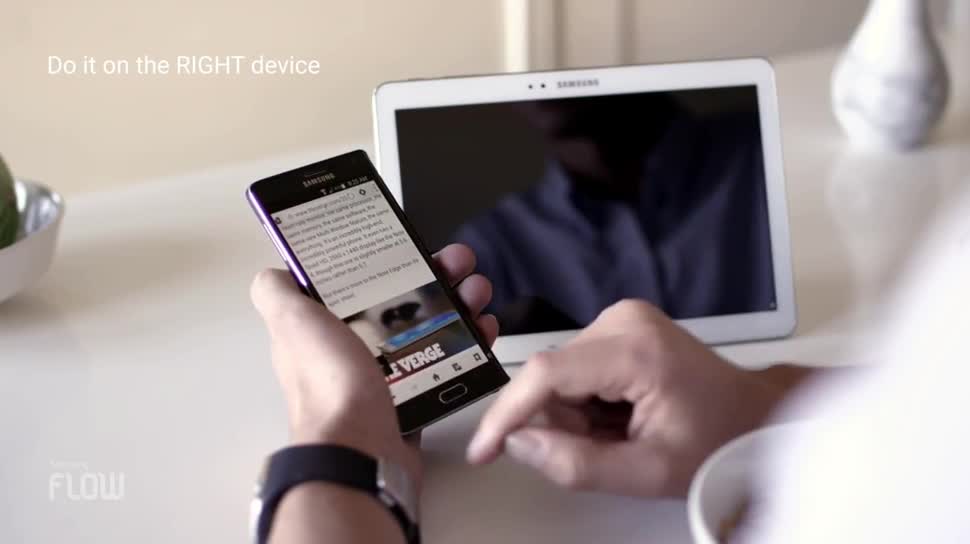 Today however, Samsung is making an attempt to copy its Cupertino rival yet again, by introducing an all new ‘Flow’ app that tries to replicate the functionality of Apple’s Continuity feature. Samsung’s tool will allows users to easily set down their phone and pick up what they were doing on their tablet, or vice versa. According to The Verge though, unlike Continuity, you have to specifically tell Flow what activity you want to transfer and where you want to pick it up.

“Once Flow is set up on a group of Samsung devices, it’s activated through either the Android share button or, in some apps, a dedicated Flow button. It’ll ask which nearby Samsung device the activity should be sent to, and then — at least, according to Samsung’s video — it’ll pop up on that device pretty much immediately.

Flow’s other big feature is sort of like a save-it-later button for anything and everything. It doesn’t appear to actually save the content, but it does allow you to basically bookmark what you were doing in an app and pick it back up later. Additional features are supposed to come to Flow in the future, too”.

Samsung Flow is currently in beta and is also limited to the US for now, with support for a handful of Samsung devices including the Galaxy S5, S6, S6 Edge, Note 4, Note Edge and the Galaxy Tab S.