It sure is easy to give Samsung a hard time with all their copying ways, but you have to give their marketing team credit for hilarious ads that poke fun at their competitors. 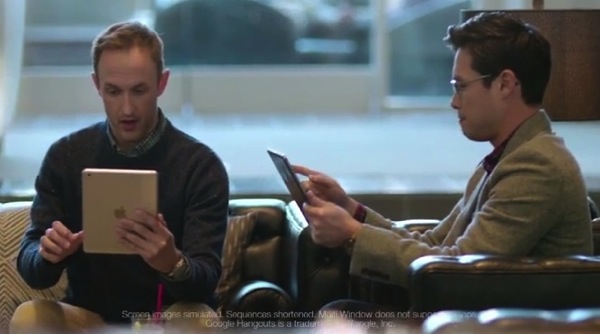 The latest ad uploaded to the company’s YouTube channel shows off the Galaxy Pro Series tablets, and in the process has fun mocking Apple’s iPad, Microsoft’s Surface and Amazon’s Kindle. We won’t spoil the jabs—check out the ad below:

It can do that? The Galaxy Pro series of tablets have more great features than ever, with screens that blow the competition away.

Oddly enough, despite Samsung’s ad showing the limitations of rival tablets, if you squint enough you will see fine print on the ad as it plays showing the text “screen images simulated, sequences shortened.” Other companies do this too, but I’ve never seen disclaimer text this tiny and hidden.

What do you think of this ad? It sure is better than these other horrible Samsung ads.

American Express Canada and Metrolinx have just enabled tap-to-pay functionality on eligible PRESTO devices for GO Transit and Union Pearson (UP) Express in the Greater Toronto and Hamilton Area. Cardmembers can pay for their adult transit fare with a contactless-enabled American Express Card, mobile wallet, or payment-enabled smartwatch. To make for a seamless experience, Cardmembers...
Usman Qureshi
11 mins ago

WhatsApp is finally rolling out the ability for users to leave group chats silently without notifying all members of the group that they are no longer part of the conversation. When you leave a WhatsApp group silently, only the group admin will be notified that you have left the chat. Meet leave groups silently 👋...
Usman Qureshi
54 mins ago