When the Samsung Galaxy S7 launches early next year, it may borrow some features from competitors, such as a pressure sensitive display, which may be familiar to you as 3D Touch — see iPhone 6s — (or “Incredible Touch” á la Huawei), people familiar with the matter have whispered to the Wall Street Journal.

In addition, Samsung is considering adding a new high-speed charging port and a retina scanner to some versions of its high-end device. The next-generation charging and connection port (called a USB Type-C port) will give users a full day’s charge in less than 30 minutes.

The non-curved version of Samsung Galaxy S7 is said to include an external memory card slot, according to one person briefed on the matter. Samsung’s flagship devices will retain the same look as the S6 models, with one change: The rear camera is said to be flush with the shell of the device.

It may not surprise you, but Samsung actually patented something similar to the 3D Touch, a key feature of the iPhone 6s. As spotted by GalaxyClub.nl, Samsung’s patent shows a crude diagram of a pressure-sensitive display that reacts differently depending on the amount of pressure it senses. 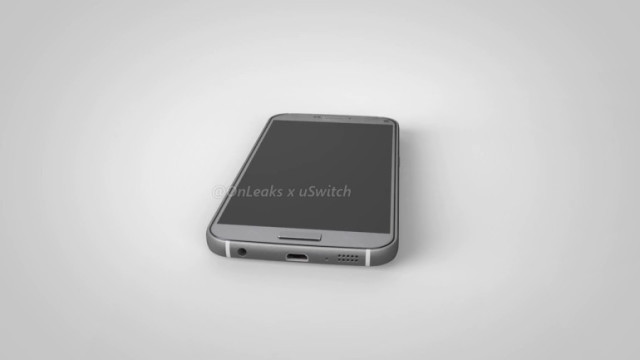 OnLeaks has managed to obtain renders of the Galaxy S7 (via uSwitch), which show that the Plus version will feature a 6-inch display. The renders also contradict rumours of a USB-C type port, as it shows a standard micro-USB slot.

The Samsung Galaxy S7 and S7 Edge will compete directly with Apple’s iPhone 7 and are said to be launched in March 2016 in the US.