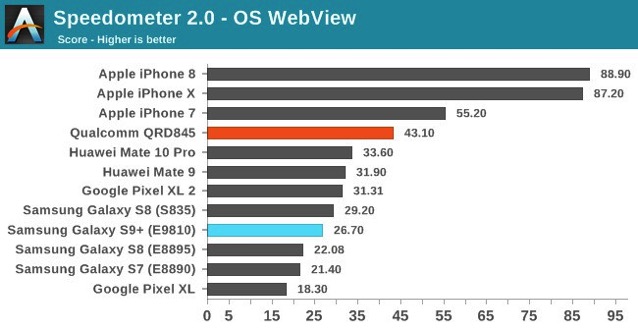 Just like every year, Samsung tried its best with the Galaxy S9 series smartphones to outdo the iPhone X, but looking at early benchmarks, it seems Samsung’s latest flagship phone is no way near as powerful as Apple’s latest iPhones. What’s worse, the Galaxy S9 can’t even match Apple’s iPhone 8 or iPhone X in 4K video recording due its poor processing power (via CultofMac).

In theory, the Galaxy S9 should easily outperform the iPhone 8 and even the iPhone X. But according to the latest benchmark tests, it can’t even keep up with the aging iPhone 7, let alone its successors.

Samsung’s new device, which is being marketed for its stellar cameras, is capable of recording super-sharp 4K video at 60 frames-per-second — but only for a maximum of five minutes. If you need to shoot for longer, you’ll have to reduce to framerate to 30 fps.

The iPhone 8, iPhone 8 Plus, and iPhone X are all capable of shooting 4K video at 60 fps for as long as you like.

In terms of specs, Samsung’s Galaxy S9 features Qualcomm’s latest Snapdragon 845 chipset with eight processing cores, four of which are clocked at 2.8GHz or faster. In comparison, Apple’s A11 Bionic chip has four cores, just two of which are high-performance cores clocked at 2.39GHz.

So for those who are in the market for a new smartphone with superior 4K video recording capabilities, the Samsung Galaxy S9 may not be the ideal choice for them.