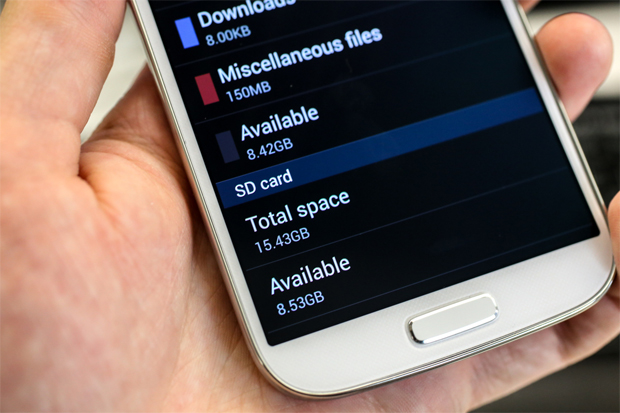 After performing a factory reset on 16GB version of Samsung’s new flagship smartphone, the Galaxy S4, it shows a mere 8.49GB of available storage space meaning nearly 50% of the smartphone’s space is taken up with its operating system and built-in apps. In a lame explanation sent to CNET, Samsung has said that “you’re getting more features and a higher-res display in return”. Wow, sounds like a ground breaking trade-off!

Samsung says, “For the Galaxy S4 16GB model, approximately 6.85GB occupies [the] system part of internal memory, which is 1GB bigger than that of the Galaxy S3, in order to provide [a] high resolution display and more powerful features to our consumers.”

As the source points out, it’s hard to understand how the S4’s 1080p display would impact storage that much. To cover things up, Samsung adds that in order to offer the ultimate mobile experience to our users, it provides ” a microSD slot on Galaxy S4 for extension of memory”. Funny thing is, Samsung doesn’t even let you install apps onto that card. When CNET mentioned the S4’s less-than-advertised storage to its Facebook page, many were annoyed, with some calling it “a scam and mis-advertising”.

Samsung should be selling this as an 8GB phone, not 16GB!” a commenter writes. “Price should be lower then,” another opines.

“I personally feel that if you buy a 16GB phone, it should have 16GB available for the user. When I buy a pint I expect a pint,” another succinctly writes.

Some commenters think a spot of Android tinkering is the easy way to get that storage back. “Root… simples,” one writes. Others aren’t convinced though, with one opining, “For £550 you shouldn’t have to void your warranty and potentially brick your phone, simply to have the advertised amount of space.”

So guys, what do you think of the S4’s limited storage?

Are you ready for Apple’s expected iPhone 14 launch this fall? If you are, let’s hope your wallet is ready too, because according to one analyst the prices are going up this year for the Pro series smartphones. Wedbush analyst Daniel Ives said in a research note (obtained by MacRumors) that he believes the iPhone...
Gary Ng
26 mins ago