According to a web traffic analytics company StatCounter, Samsung has surpassed Apple for the first time ever to claim the top spot in worldwide mobile web traffic, Fortune reports. StatCounter’s latest report covering global trends of internet access and software popularity dubbed ‘Internet Wars’, has also revealed that Google’s Chrome has overtaken Internet Explorer as the No. 1 in America. 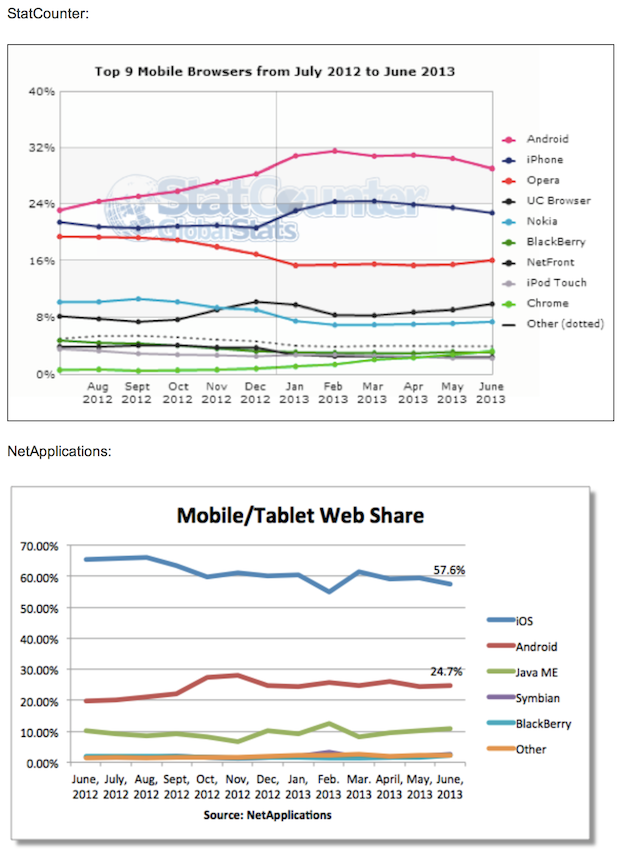 Fortune’s Philip Elmer points out that back in March, Apple CEO Tim Cook said that iPhone may have lost the lead in terms of market share, but iOS continues to dominate the Internet in terms of web usage. Tim noted that iOS leads Android in global web usage by 58% to 25%. However, according to StatCounter, Android leads iOS 29% to 25% (see the two graphs above). It seems that there are two reasons why the two stats are so far apart.

“First, Cook relies on data provided every month by NetApplications, a Sunnyvale, Calif.–based outfit that counts the Web usage of both smartphones and tablets. StatCounter is counting only smartphones.

Second, NetApplications weighs its data according the Internat usage in each country surveyed. StatCounter, by contrast, uses “no artificial weighting,” as it proclaims proudly on its FAQ. In other words, data from a country with few Internet users (like Burma, where only 1.1% of the population is online) is treated the same as a country with heavy Internet usage (like Norway, where 95% of the population surfs the Web)”.

Meanwhile, Google’s Chrome appears to have overtaken Microsoft’s Internet Explorer for the first time, with Firefox and Safari taking third and fourth place respectively. Chrome took 34% of the market, compared to Internet Explorer’s 32%.

Uber Canada has renewed its commitment to Driving Change, a multi-year, multi-million dollar campaign where the ride-hailing giant partners with leading sexual assault and domestic violence partners around the world. In Canada, Uber is extending its ongoing partnerships with YWCA Canada, WomanACT, EVA BC, and Le Chaînon with $450,000 (CAD) over the next two years....
Usman Qureshi
4 mins ago