While Apple has continued to set new iPhone sales records each quarter, its South Korean rival Samsung’s handset profits have declined for the past seven consecutive quarters.

And it’s a no brainer why the copycat giant has suffered this fate, looking at its latest efforts and marketing budget being wasted on trolling Apple’s big iPhone 6s launch in London, instead of figuring out how to design the stylus right for its latest flagship phablet. 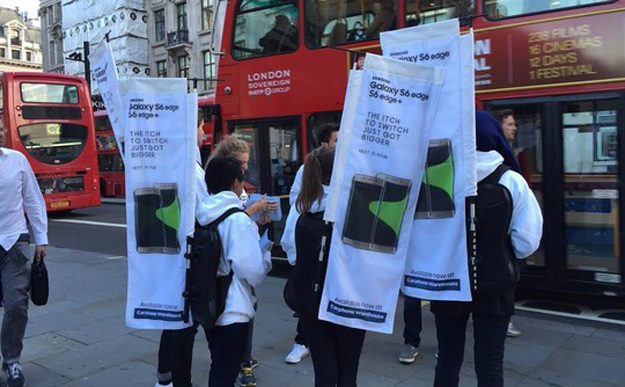 As people lined up outside the Apple Store on Regent Street in London, Samsung saw this as opportunity and hired a team to hand out pillows and blankets to people waiting in line.

Sources report that even though the team hired by Samsung didn’t identify themselves, their bright blue blankets, water bottles and pillows all had the hashtag #NextIsNew printed on them–a Samsung hashtag.

According to the International Business Times, since the bright blue color of Samsung’s gifts matched Apple Store employees’ shirts, one Apple fan in line outside the Regent Street store thought they were being handed out by Apple.

“They were given to us by Apple”, he said. His friend had looked up the hashtag though, and quickly corrected him: “No man, it was Samsung, I did a little research.”

More Samsung marketers returned to the store in the morning, according to The Inquirer. Wearing Samsung apparel, they walked around holding big signs that pictured the Galaxy S6 edge+ with the line, “the itch to switch just got bigger.” Stay classy, Samsung.