In an attempt to take on Apple’s iTunes Radio streaming music service, Samsung has just unveiled ‘Milk Music’, a new streaming radio service (with an odd name) available exclusively on Galaxy devices, Engadget is reporting. Available as a free download on Google Play, the app allows free music streaming without any ads, though its currently available in the US only. 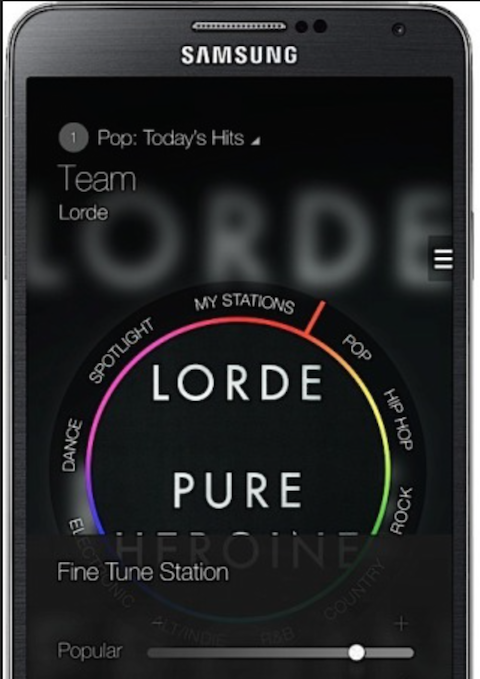 Daren Tsui, vice president of music for Samsung’s Media Solutions Center America, said that even though Samsung is a Korean company, starting the service in the US, the world’s biggest music market, makes sense. “Knowing Samsung, the chances are very high it will be expanded internationally”, he added. At launch, Milk Music will only work on the Galaxy S3, the Galaxy S4, the Note 2, the Note 3 and Galaxy S4 variants like the Active and the Mini, as well as the forthcoming Galaxy S5.

Interestingly, Milk Music’s catalog of nearly 13 million songs is powered by Slacker, which is why Samsung didn’t have to do any licensing deals.

“It’s the design of Milk that really makes it stand out from other internet radio apps we’ve seen. The first distinct difference is apparent the second you launch the app — you’ll be presented with a large round dial populated with nine different genre stations along with Spotlight and My Stations. Spotlight is a set of “what’s trending” stations curated by Samsung and Slacker that changes on a weekly basis. According to Samsung, Spotlight is also an opportunity to deliver Milk Music exclusives and “first-listens” from collaborators like Jay-Z.”

If you’re a Galaxy device owner and have given Milk Music a go, don’t forget to share your experience with us!