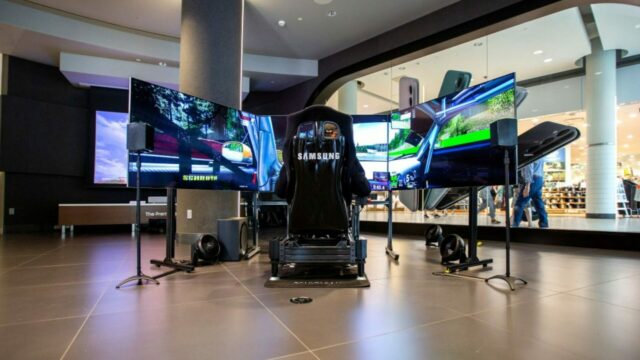 I had the chance to go hands-on with the simulator with Canadian professional race car driver, Daniel Morad as my coach. The Samsung Neo QLED 8K TV Racing Simulator is now stationed at the Samsung Experience Store in Toronto, ON. Here, as I walked in, there was no way to miss it. 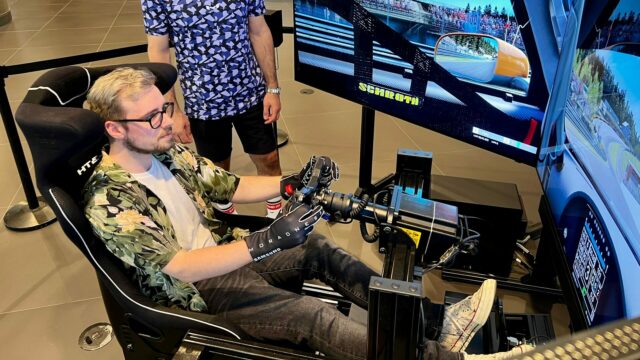 Isolated on the show floor is a full-fledged racing-sim set up with an immersive display set up comprised of the three Neo QLED 8K displays. Whether you walk into a Best Buy or even the Samsung Experience Store itself, there are high chances you’ve seen an 8K display previously. However, seeing it run an authentic racing experience elevated the viewing experience.

Morad first began his career in 1998, competing in karting circuits. Now, across his career, Morad has raced in the Firestone Indy Lights series, A1 Grand Prix, and Formula BMW USA series. Additionally, he is quite an enthusiast in racing simulators and tech. 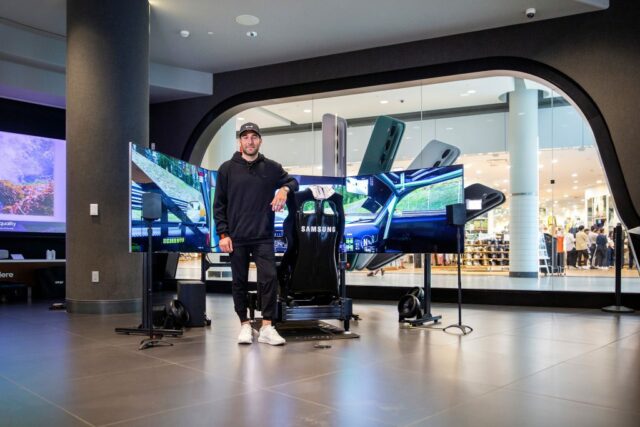 “Simulators have been an essential tool for my race training regimen over the years, and it’s exciting to see Samsung technology elevate the experience even more,” said Morad. “Beyond training for my next race, the Samsung Neo QLED 8K Racing Simulator is also an awesome gaming experience that feels remarkably close to the real thing.”

While being in the simulator, I had a humbling experience behind the wheel. While I’m certainly not cut for the circuits, it was hard not to marvel at the displays in front of me. Most impressively was being so close to the screen, that the pixels on the screen were untraceable. Many people often wonder why 8K innovations are such a priority while 4K media is still picking up steam. Although the hesitation towards upgrading to an 8K TV is reasonable, the pixel density offered on a panel featured on Samsung Neo QLED 8K TV can’t be understated. It is one of those driving force features that propel the next generation of TVs.

The Samsung Neo QLED 8K TV Racing Simulator was created in response to the growing popularity of gaming and racing video games. Samsung Neo QLED 8K is able to render details in both dark and bright areas in even sharper quality than 4K monitor screens thanks to the Quantum Matrix Technology Pro.

Those in Toronto and the GTA can experience the Samsung Neo QLED 8K TV Racing Simulator themselves by visiting the Samsung Experience Store at CF Toronto Eaton Centre.

An Apple AirTag proved instrumental in the arrest of a U.S. airline worker in connection with a series of luggage thefts — reports Insider. Apple launched the AirTag for $29 USD ($39 CAD) last year to help customers keep track of their belongings (and more). AirTags harness the Find My network, which comprises over one...
Nehal Malik
2 hours ago