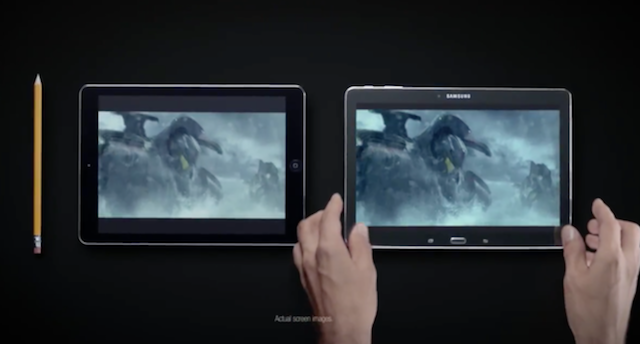 Just when the world thought Samsung was getting a tad bit innovative with its Galaxy Gear advertising campaigns for a change, the company seems to have once again gone back to trashing Apple products in its latest TV commercials. As noted by The Verge, a new ad for the Galaxy Note 3 targets the iPhone 5s while a Galaxy Tab Pro 10.1 commercial attempts to go after the iPad Air.

Samsung’s latest Note 3 ad compares its 5.7-inch “phablet” with the iPhone 5s, featuring NBA star LeBron James who is shown running away from the 4.0-inch iPhone.” Samsung calls it “a serious mismatch.” Take a look:

In its Galaxy Tab Pro 10.1 commercial, Samsung takes a swing at the iPad Air. “It’s an extremely simple tool, but also… extremely pointy,” says Samsung’s voice-over actor. “It’s been used to make tentative appoints, and to cheat at golf.” When the camera reveals the iPad, there is another device behind it — the “even thinner” Galaxy Tab Pro 10.1.

Samsung goes on to claim that its new 10.1-inch tablet is superior for watching video while highlights its multitasking prowess. Other than that, you be the judge and tell us what you think of Samsung’s new TV ads.