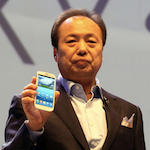 While a lot of the mobile-technology world is buzzing with excitement over the expected announcement of an iPad Mini launch event from Apple, Samsung is sliding in with a product release of their own: a 4-inch mini Galaxy S III.

JK Shin, head of Samsung Mobile Communications confirmed the launch event for tomorrow, October 11 and noted that this will not be an entry level handset and that it will feature a full form factor. Other sources indicate that the device will feature a 1-GHz dual-core STE U8420 processor, 1GB of RAM, 16GB of internal store (expandable to 32GB with microSD), Wi-Fi-, Bluetooth 4.0, HSPA, NFC for mobile payments and Android Beam, 1,500 maH battery, 5-megapixel rear-racing camera (sporting auto-focus and an LED flash) plus a VGA-resolution camera on the front.

On the reported 4-inch Super AMOLED display with a resolution of 800-by-480 pixels, users of the device can expect to enjoy the latest Google operating system, Android 4.1 Jelly Bean.

While the device is expected to carry a hefty $500+ price-tag, it may just suit a percentage of the market that found the 4.7″ Samsung Galaxy S III a little too large.

Is this phone more attractive at the smaller size? Are you more inclined to purchase one now?

According to a report from Bloomberg's Mark Gurman, Apple is parting ways with its Vice President of Procurement, Tony Blevins, after the latter was filmed making an inappropriate joke in a viral TikTok video. Blevins was one of Apple's top supply chain executives and one of Tim Cook's most effective cost cutters. Most recently, he worked...
Nehal Malik
10 mins ago