Users should be careful what they say around their TV, as it may just be listening, or even recording as well. Yep, you read that right, as a single sentence buried in Samsung’s “privacy policy” for its Smart TVs discovered by The Daily Beast has revealed that it is indeed recording everything you say and sending it to a third party. “Please be aware that if your spoken words include personal or other sensitive information, that information will be among the data captured and transmitted to a third party,” the policy reads. 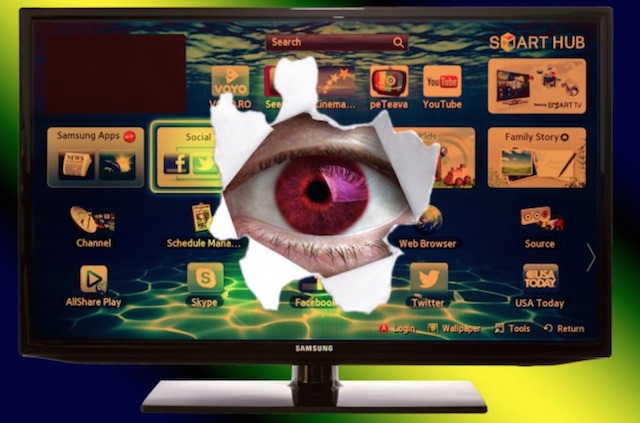 It is quite likely that Samsung is collecting voice commands mostly to improve the TV’s performance, and using a third-party service to convert speech to text. However, Corynne McSherry, the intellectual property director at the Electronic Frontier Foundation (EFF), said that as a customer, she’d like to know who that third party was, and would also like to know whether her words were being transmitted in a secure form. “If the transmission is not encrypted, a SmartHacker could conceivably turn your TV into an eavesdropping device”.

Writing in Salon in November 2014, Michael Price, counsel in the Liberty and National Security Program at the Brennan Center for Justice at the NYU School of Law, said the details in his new smart TV’s lengthy privacy policy made him “afraid to use it.

“I do not doubt that this data is important to providing customized content and convenience, but it is also incredibly personal, constitutionally protected information that should not be for sale to advertisers and should require a warrant for law enforcement to access,” Price wrote.

As a response to the article, Samsung has just issued an official statement reiterating its privacy policy, while adding that its Smart TV’s voice recognition feature can be deactivated by the user manually.

“Samsung takes consumer privacy very seriously. In all of our Smart TVs we employ industry-standard security safeguards and practices, including data encryption, to secure consumers’ personal information and prevent unauthorized collection or use. Voice recognition, which allows the user to control the TV using voice commands, is a Samsung Smart TV feature, which can be activated or deactivated by the user. The TV owner can also disconnect the TV from the Wi-Fi network”.