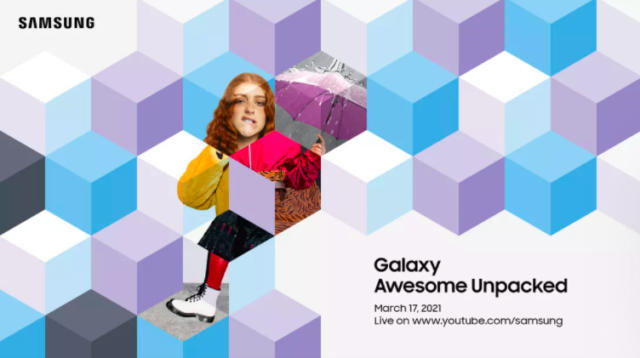 Samsung is already planning to follow up its January Unpacked event with yet another virtual keynote. The company’s second Unpacked will take place on March 17th.

It was only January when Samsung held its Galaxy Unpacked keynote, announcing the Galaxy S21, Galaxy S21+, and Galaxy S21 Ultra. Now, Samsung has formally sent an invitation to the masses to attend its ‘Galaxy Awesome Unpacked’ event.

Given the timing of the event and the emphasis on the word “awesome”, it’s likely that Samsung will be using the event as a way to officially announce its new mid-range device, the Galaxy A52 and Galaxy A72. Last year, Samsung released the ‘Awesome is for Everyone‘ promo video for the Galaxy A51.

A number of leaks have been filtering through lately, indicating that the products may come in a 4G and a 5G model. It’s also been said that the A52 will have a super AMOLED display with 120Hz. Rumours also point to the device running Qualcomm SM7225 Snapdragon 750G 5G.

Samsung’s A-Series devices have always been popular due to their low barrier of entry price point. It’s likely that Samsung wants to capitalize on the line’s popularity and put it on centre stage for its user base.

Only time will tell what is in store for Samsung. On March 17, the Galaxy Awesome Unpacked will kick off at 10 AM ET/7AM PT and will be hosted on Samsung’s YouTube channel as well as its Facebook and Twitter accounts.

[caption id="attachment_365768" align="aligncenter" width="1000"] Image: DuckDuckGo[/caption] Privacy-focused web browser DuckDuckGo has announced that its third-party tracker loading protection will now also work against Microsoft tracking scripts on third-party websites — reports The Verge. Advertising services use trackers to follow users across websites and profile them. These user profiles are then used to serve interest-based and...
Nehal Malik
16 hours ago