According to a report from The Wall Street Journal, Samsung is set to roll out a new line of less expensive smartphones to compete with other manufacturers like Xiaomi, a Beijing-based company.

A few months ago Xiaomi has taken over the title of China’s number one smartphone distributer, leaving Samsung tied with Coolpad and Lenovo for second place. Even though the Korean giant  is still on top of the global smartphone market, they have been losing market share in the past couple of quarters. The company probably feels the impact most in China and in India where they have been the dominant manufacturer for several years.

“After leading sales in the Chinese smartphone market every quarter for the past two-and-a-half years, Samsung dropped behind Xiaomi during the quarter ended June, tying for second place with Lenovo Group Ltd. and Coolpad Group Ltd. , according to data tracker Canalys.

In China, where Samsung gets 18% of its total sales, more than half of which is from the mobile-phone division, the company is parachuting in executives and outside consultants to assess the problem and figure out how to fix it, according to people with knowledge of the moves. The company is lowering prices for its existing handsets by up to 20%, considering a new marketing strategy in the country, and preparing to roll out a new, cheaper line of smartphones for emerging markets”

One of the causes behind this reaction from Samsung is the news that He Wenzong, a 30-year-old employee at an apparel company, has left his Samsung Galaxy S3 for a smartphone manufactured by Xiaomi. Wenzong argues that he has switched to a phone of equal or greater quality for a fraction of the cost.

Wenzong was able to replace his Galaxy S3 with a phone from Xiaomi, which he says offers better software and services, for 2,000 yuan (about CA$367). In comparison, purchasing another device from Samsung would have cost him 3,500 yuan (about CA$643). 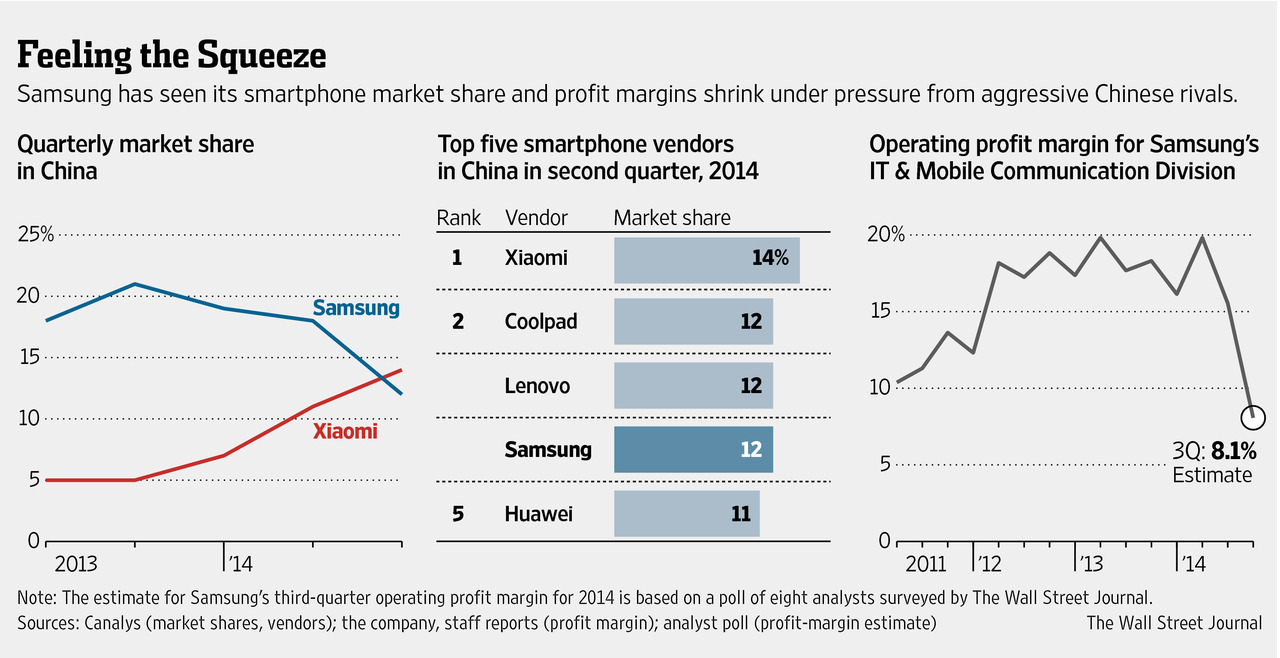 In order to remove excess smartphone inventory, Samsung has decided to lower the cost of some smartphones in China by between 10 and 20 percent. Canalys, a data tracking company, said that this move may help Samsung recapture some of the lost market share.

Do you think Samsung is starting to lose its edge in developing countries and will the new line of less expensive smartphones help the Korean company keep its edge in the mobile device market? Let us know in the comments below.