The folks over at Tom’s Hardware have performed some more tests on both Samsung and TSMC versions of the A9 SoC found in the new iPhone 6s / 6s Plus devices, to find out if there are any actual power or performance differences between the two chips. Turns out, both versions of the A9 SoC actually deliver the same level of performance. Interestingly though, Samsung’s chip was found to offer slightly better power efficiency, extending battery life between 3% to 10%. On the contrary, previous tests have all favoured TSMC chips in terms of battery performance. 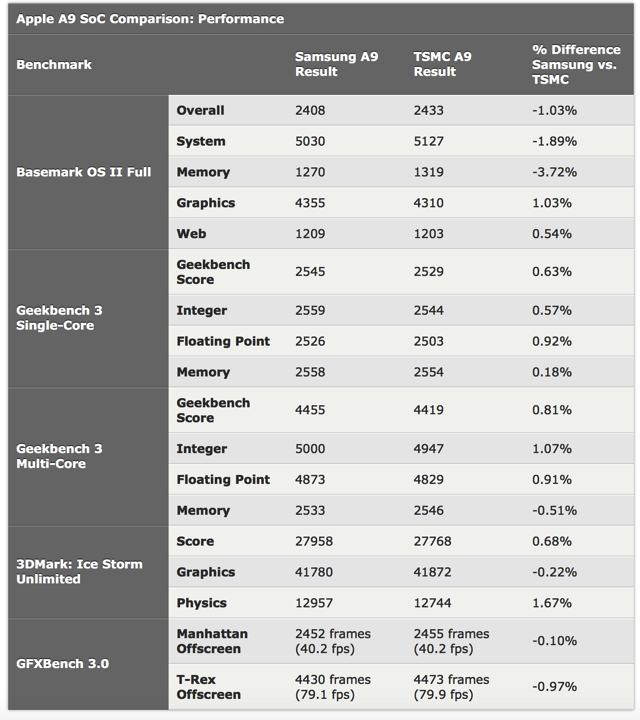 As you can see in the above performance tests, all of the CPU, GPU, and system performance scores show less than 2% difference, which lies within the margin of error for these tests. However, the Basemark OS II battery score, which accounts for both battery life and performance under CPU-intensive workloads, shows more significant differences between the two SoCs.

The GFXBench battery life test is the GPU equivalent of Basemark OS II, providing a worst-case battery life based primarily on GPU, memory, and display power consumption that is similar to what you might see while playing an intense 3D game. In this scenario, both the performance and the skin temperature on the back of each iPhone are nearly identical, indicating that both A9 SoCs generate a similar amount of heat and exhibit minimal thermal throttling. The Samsung-made A9 manages to last 3.5 percent longer when pushing the GPU hard, which equates to a meager five minutes and is barely outside the margin of error in this test.

In the end though, the source concludes that the extra few minutes of battery life “you may get” from a phone using the Samsung-made A9 will hardly be noticeable.

In case you haven’t already, you can find out which version of the A9 SoC in installed on your iPhone 6s / 6s Plus by using this method.