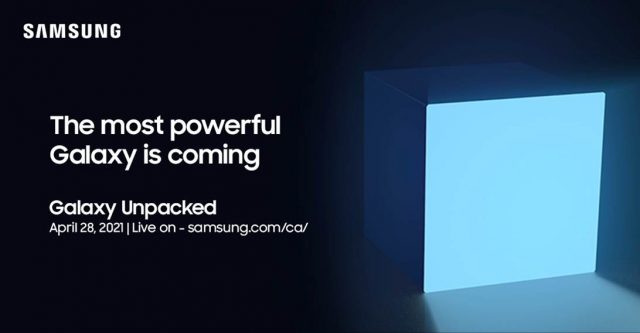 Samsung has officially announced the date of its next Unpacked keynote event. On April 28, Samsung is poised to host its third event of the year and the company has teased that “the most powerful Galaxy is coming”.

Announced via a press release and invitation, Samsung has said that on Wednesday, April 28 at 10 AM ET/7 AM PT, the Unpacked event will go live. The company is remaining fairly tight-lipped on what to expect other than the fact that “the most power Galaxy” device will be shown.

As for what device Samsung could be teasing, it’s unlikely that “most powerful” is attributed to a new smartphone. Although rumours have spun that Samsung is working toward releasing its foldable Galaxy Z Fold 3, this Unpacked is likely to set the stage for the release of a new Galaxy Book laptop.

When comparing the processing power of Qualcomm’s processors, which power Samsung’s mobile devices, even the  Snapdragon 888 wouldn’t compare to the silicon that would theoretically power a new Galaxy Book. Samsung’s Galaxy Book models from last year feature Intel’s processors. If Samsung optioned to use Intel’s 11th Gen Tiger Lake chip, it may align with what the company is teasing.

It won’t be long until we know for certain what Samsung has up its sleeve. On April 28th, you can tune in to the Unpacked event on Samsung’s website, its YouTube channel, or via their Twitter account.

Your Apple Watch can help you find your iPhone if it’s nearby. Simply Touch and hold the bottom of the screen, swipe up to open Control Center, then tap the Ping iPhone button. As a result, your iPhone makes a tone so you can track it down. In the latest beta release of iOS 16,...
Usman Qureshi
2 hours ago

Alexa is getting smarter and more complex every single day by finding new ways of applying learned  behaviours  to new and different scenarios. Currently built into more than 100,000,000 devices worldwide, Alexa and the Echo suite of devices continue to evolve. Check out the top Amazon devices and Alexa updates you need to know for...
Usman Qureshi
3 hours ago