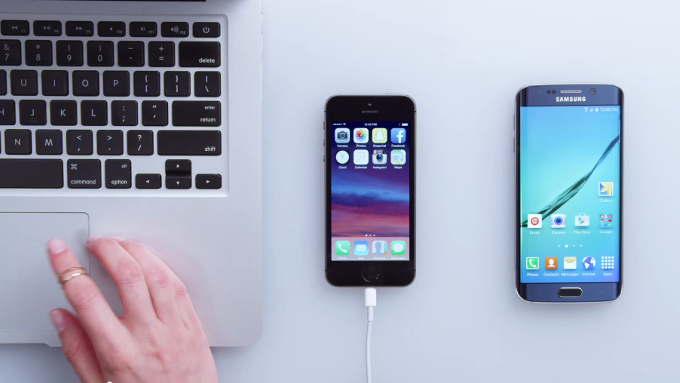 Moving to a new smartphone, especially a different brand or operating system, is not an easy process and manufacturers.

Samsung’s device switching software is available as both a smartphone app and PC program. The company debuted Smart Switch, which helps you copy over all your pictures, music, documents, and contacts from an old Android device or iPhone to your new Samsung device.

Apps and programs that support iOS to Android transfer are also transferred during the process. Samsung has decided that some potential customers may need a nudge to swap to a new device from a different manufacturer.

The company has released four videos dedicated to showing how simple it is to use Smart Switch and move to a Galaxy S6 or S6 Edge. Three of the four videos are dedicated to the iOS platform.

In the “Transfer via iTunes” video, Samsung decides to use a MacBook Air to transfer from an iPhone to a Galaxy S6. The Korean smartphone giant could have used one of its own laptops, since they do have several ultrabooks of their own. Samsung may have done this to appeal to Apple customers who use a Mac, or because iTunes is much better on OS X. However, it looks sort of weird that the company would miss the opportunity to promote its own product.

Check out all of Samsung’s Smart Switch videos from their website.