Save and Share Your Favourite Places with Google Maps ‘Lists’

A new Google Maps feature, that lets you make ‘Lists’ of places that you can star, save and share with friends, is rolling out today on Google Maps mobile apps. As detailed by TechCrunch, there are three different lists types being provided at launch i.e. “Favorites,” “Starred Places,” and “Want to Go”, although you can also create your own custom lists which may be public, private, or shared. 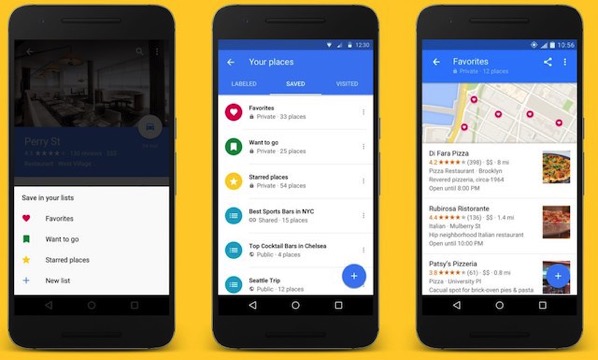 Zach Maier, the lead product manger for Google Maps, said that being able to create and share lists of places could give Google Maps a more social feel to it, an area that Google wants to explore. Previously, Maps has been focused on getting people from point A to point B without getting lost, but now, “we want to help people break out of their routine, and do something new”, Maier explained.

Google hasn’t partnered with any brands or publishers on the launch to seed the service with interesting and useful public lists, but Maier didn’t rule out the possibility in the future. Today, Google already works with several companies, like NYT, USA Today, Michelin, and Google-owned Zagat, for instance, to augment its search results with more information, including links to those brands’ own lists.

Google’s public lists won’t yet be searchable, but your own lists will pop up as suggestions when you begin to type in the search box. Google says the new feature is rolling out today on iOS and Android, and lists will be viewable on the web through shared links.

As reported by 9to5Google, Google’s new wired Nest Doorbell which appeared in the Google Home app last month has been leaked early in stores with availability expected later this week. The new Nest Doorbell was spotted in a Best Buy store, with the packaging saying “2nd generation” and “Wired” with a check mark, in white and dark...
Usman Qureshi
12 mins ago

As the volume of trips to and from post-secondary campuses across Canada is doubling, Uber is sharing some back-to-school trends highlighting how students are relying on ridesharing to get around on and off campus. "Now that classes are back in full swing, it’s a great time to remind students how to use Uber app features...
Usman Qureshi
40 mins ago