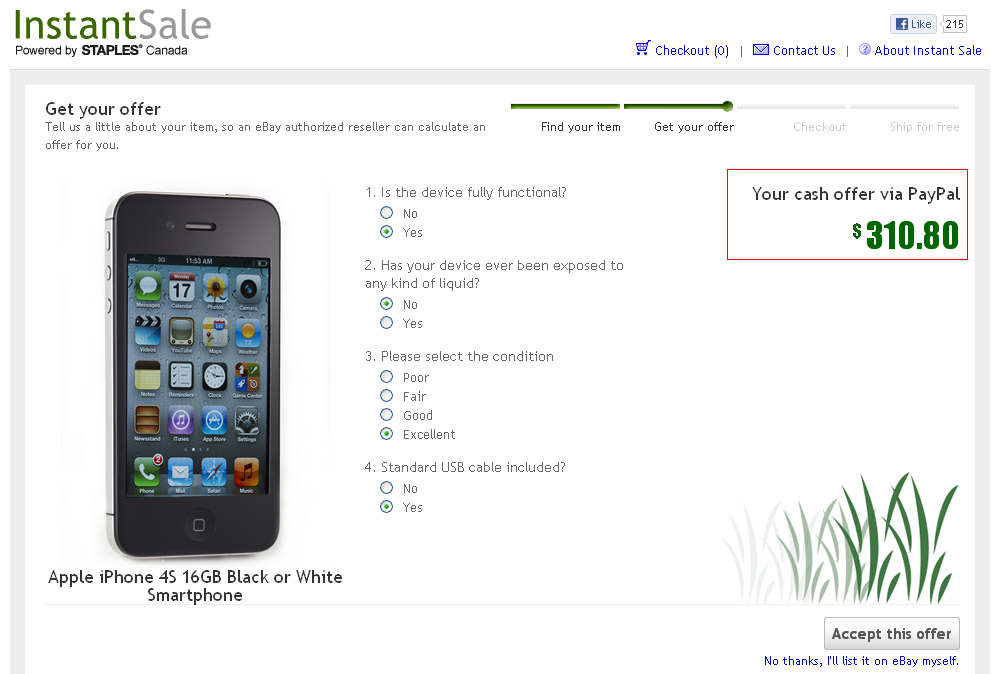 To all the Canadians, there really isn’t many websites offering trade-in programs for smartphones. Sometimes the best way to receive top dollar when selling a smartphone is to sell on Amazon or eBay. That can be a tricky task for first time sellers, so allow us to explain an alternative program offered by eBay.

Since January of 2012, eBay Instant Sale has been online in Canada. The program will ask a few questions about the device you want to trade-in and will then give you an offer within seconds. If you accept the offer, you will just have to package the product in a box and eBay will provide the shipping label free of charge.

Now the reason we are bringing this up not only relates to the upcoming iPhone release, but eBay is offering 20 percent more cash on 36-select smartphone trade-ins until September 24 at 11:59 pm. Exact models were not specified by our source, but we found that the iPhone 4S/4/3GS, Samsung Galaxy S2/S3, and the Blackberry Torch have considerable offers.

Here is more from NewsWire:

“Just in time for the iPhone 5’s arrival eBay is offering top-dollar for smartphones,” said Andrea Stairs, country manager of eBay Canada. “We’re thrilled to give Canadians a reason to trade-in before they trade-up, while ensuring discarded devices end up in the hands of new owners.”

Click here to see what type of offer you receive for your phone. I was testing the system out and found that an iPhone 4S has a maximum trade-in value of $404 and the Galaxy S2 can be traded-in for $228.

Will you be trading in or selling your phone to buy the iPhone 5?