We all crave the need for speed right? Well, if you have an iPhone 3GS you know what it’s like to have a speedy iPhone. But what about being able to change your settings in a jiffy? The app SBSettings, available via Cydia for jailbroken iPhone is what you need (if you don’t already have it).

SBSettings: One of the Must Have Cydia Apps Out There

SBSettings is a shortcut app that lets you quickly toggle your 3G, WiFi, Bluetooth, brightness, and other settings by swiping your finger across the upper area of your iPhone’s screen. Anyways, SBSettings got a minor update recently and added a couple improvements to their 3.0.2 release: 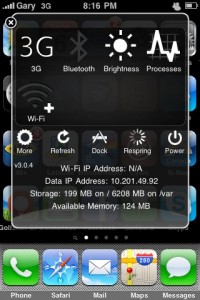 Instead of fumbling through the settings menu on my iPhone, SBSettings makes it super easy to toggle on/off WiFi, Bluetooth, and more. If only Apple had an app like this…but they don’t. Doh! It is reasons like this we should support all those hardworking Cydia app developers out there!