Readdle’s Scanner Pro app says that scans will now have shadows automatically removed, making it easier than ever to get a useful scan. 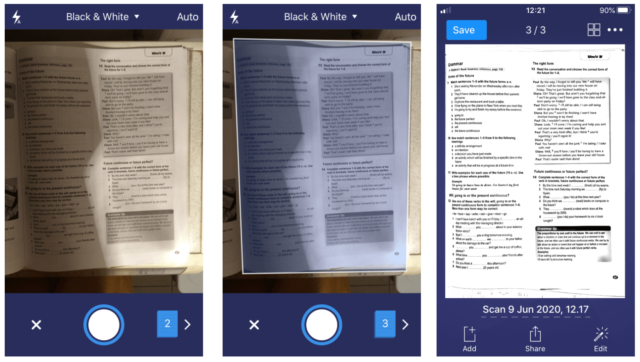 Shadows on scans have always been an issue, and the latest update from Scanner Pro hopes to make the issue a thing of the past.

“Finding perfect lighting to scan a book page or a receipt can be a real pain,” reads a press release from Readdle. “When you’re scanning something in artificial light, shadows can make parts of the scan unreadable. And sometimes it’s tricky to avoid casting a shadow with your hand holding a phone above a document. With Scanner Pro, you don’t need to worry about that anymore.”

“The new algorithm automatically works on a camera and erases shadows when you scan a document in the Black & White or Color Document mode,” the press release continues. “Just scan everything as you always did before, and technology takes care of the rest.”

The examples provided certainly show a huge increase in the quality of the image captured. The image below shows the old result in the center and a newly scanned image, using the new tech, on the right.

“We specifically designed this algorithm to remove large and deep shadows. Previously, the app could only erase small shadows and spots. Now, even if a shadow is pretty contrasting and occupies more than 30% of an image, Scanner Pro can deal with it,” says Andrii Denysov, the lead developer at Scanner Pro.

You can read more about how the new feature works over on the Readdle blog and the update is available in the App Store now.