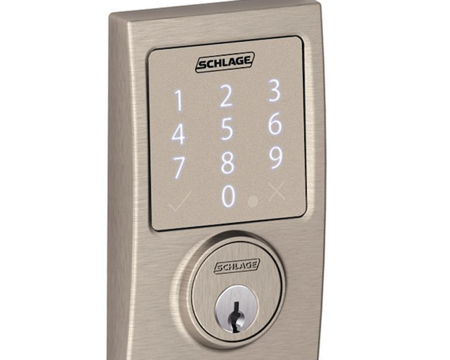 The Apple HomeKit compatible Schlage Sense Smart Deadbolt has just received its very own companion Wi-Fi Adapter, which lets you check on the lock’s status from anywhere, so you never have to wonder if the front door was left unlocked.

The simple wall plug-in Schlage Sense Wi-Fi Adapter will also send push notifications when the lock is used and is set to retail for $69.99 USD (Canadian pricing coming):

“We wanted to provide a solution, like the Schlage Sense Wi-Fi Adapter, that would allow a homeowner to connect to their lock remotely without having a smart home platform. We are excited to offer compatibility to a wider range of users looking to incorporate smart products into their homes”, said Chris Sutton, Electronics Business Leader at Schlage.

With no connection to an existing home automation system or monthly subscription charge, the free Schlage Sense app allows you to:

Of course, without this new Sense Wi-Fi Adapter, you can still control your lock remotely if you have an iPad or Apple TV3/4 acting as your Home hub. This

Editor’s note: we’re currently testing the Sense lock at home, and a review is coming shortly. Range is an issue if you’re Apple TV3/4 is far away, so this unit should help with decreasing wait times for lock updates.

Google announced on Thursday it will be shutting down Stadia, its cloud gaming service, in January 2023. The announcement took many in the gaming community by surprise, but it wasn’t an unexpected one. “While Stadia’s approach to streaming games for consumers was built on a strong technology foundation, it hasn’t gained the traction with users that […]
Gary Ng
3 mins ago

Amazon announced today it will stream 25 James Bond films on Prime Video beginning on October 5, 2022. According to the company, these 25 Bond films set to stream in Canada, the U.S., UK and other key territories is part of the 60th anniversary celebration of the iconic film franchise. Also coming is The Sound […]
Gary Ng
50 mins ago