To start off with, I want to say sorry for my unintentional absence from iPhoneinCanada over the last few weeks, I had a sudden last-minute move on my hands, and now things have just settled down. I’ve got a large backlog of Apps and a few Accessories that I want to tell you guys about.

I thought I’d come back with a Bang so today I’m writing about a couple of Scosche products, both of which will be up for grabs as a prize for our readers! 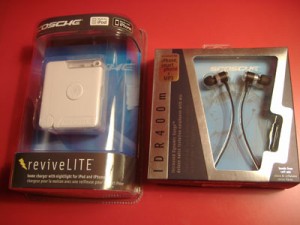 Firstly we have the Scosche ReviveLite. I’m totally not making this up – it’s an iPod/iPhone wall charger and nightlight. How great is that? 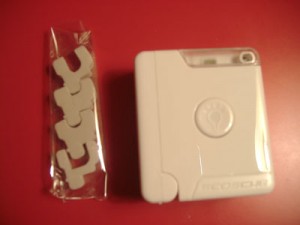 Although Scosche boasts this product as a great accessory for Travel, I tend to think that the majority of people will likely use this the only place that most Grown-Ups use nightlights – in the Bathroom. As you’ll see in the photo above, it comes with several foam inserts to properly fit various models of iPhones and iPods (3G to Nanos) – which is thoughtful.

Both my 2G iPhone and 5th Gen Video iPod fit and charged perfectly, and the LED nightlight automatically turns on/off depending on light levels. 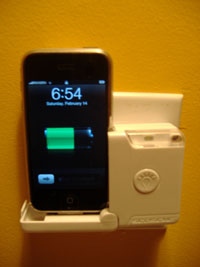 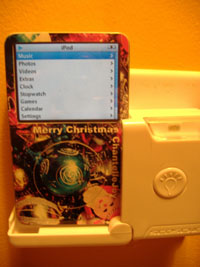 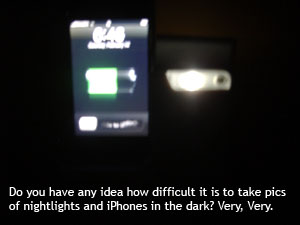 For all intents and purposes this is a neat little gadget, although I’m not convinced that a product like this needs to exist, it’s certainly unique and I’m sure that it will appeal to at least a few of you – so that’s why I’m giving my review unit away, see the end of this post for details on how to enter. If you want to buy one for yourself (it’s also available in Black) check out the Scosche site.

One last thing, the cost: $39.99. Honestly. Obviously that’s really quite high and think the Scosche people should consider the very niche market that this product appeals too – if the price was more around $19.99 I think more people would be inclined to give it a try.

Second up is something we can all get a bit more excited about, headphones! Specifically, Scosche’s IDR400m Headphones. Even more specifically, they’re called ‘Increased Dynamic Range noise isolation earphones with handsfree microphone’, fancy, right? Well because I’m no Audio expert, I had to look up just what ‘Increased Dynamic Range’ meant – I mean, I’ve heard of Noise-Cancelling Headphones , but that’s not what these are. 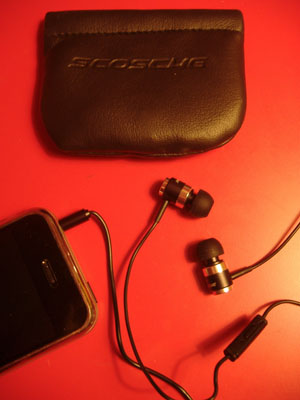 As usual, wiki to the rescue. As best I can tell,  Dynamic Range  pretty much means the range in decibels that your ear can hear, right. So then Increased Dynamic Range headphones give you louder Louds and quieter Quiets. I’m certain there’s more to it than that, so let me just dive into explaining how they sound. 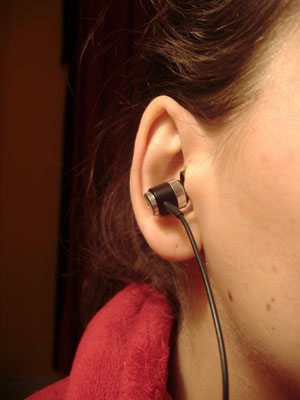 I compared these headphones to every other set of headphones I had on hand. Standard-Issue iPhone Headphone/Mic,  Inexpensive Earbuds, Apple In-Ear Headphones (no mic), and Rival Mp3 Player* Premium In-Ear Heaphones (no mic). And I have to say, these outperformed them all. I have not used regular earbuds in a while (opting for Apple in-ear headphones the day I bought my iPod), so having to compare these to those doesn’t even require comment.

I’d ashamedly been using the Rival Mp3 Player* Premium In-Ear Headphones for the better part of a year and were very happy with them, they were an improvement over even Apple’s own In-Ear Headphones. So when the IDR400m’s sounded better, I was very impressed. Although I don’t have the audio geek vernacular to describe in intricate detail how the bass was deeper, or the music was much crisper, the one description I can come up with is that they made the music Clearer – not just Louder (which I’ve only just realized is why I thought in-ear headphones were so much better in the first place). 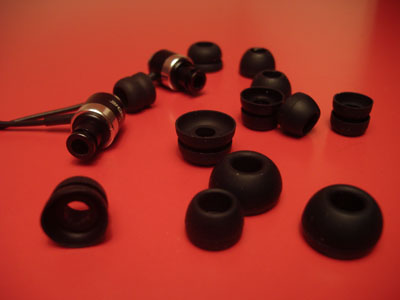 You don’t need to have your iPhone cranked to 11 to hear your music clearly. Additionally, the buds themselves were extremely comfortable, given that they provide you with 6 sets of silicone earpieces you can use. Also, although I didn’t extensively test the mic (actually only once – on accident when someone called while I was in the middle of a particularly good part of a Josh Groban song), but it worked great. And to be honest, these have become my daily headphones now.


I know there are people out there who spend hundreds on the right earphones, then there are people like me, who probably wouldn’t spend more than $50. However, with that said, if you like in-ear phones and you want really great sound quality, and handsfree, I highly recommend picking up a pair of these. They’re $79.99 – in my books, worth it.

Of course, as promised, I do have a pair to give away! (Don’t worry, I still have mine, yours will be brand new).

So, either comment below or Tweet me on Twitter (@ChantelleJoytwt) to let me know which product you want ReviveLite or the Headphones. (And I know there will be at least a few hundred entries for the ReviveLite, right?!) I’ll announce the winners next weekend.