During Apple’s WWDC keynote this month, the iPhone 4 was being praised, in part, for its extremely durable and strong display. According to Apple, the all-glass front and back finish of the iPhone 4 uses material that is apparently “more scratch resistant than ever”. More than ever! So it must top the Original iPhone, the iPhone 3G and the iPhone 3GS. A bold claim to be sure.

Apple has also released their own version of a case for the iPhone 4, called Bumpers, that protect the edge of the device but leaves the back and front of the iPhone 4 exposed. So clearly Apple has confidence in their scratch-resistant iPhone.

While many early iPhone 4 reviews indicated that the device is rather durable and receiving no damage after being dropped, Engadget now reports that several scratches have been found on the back of its review unit after only five days. 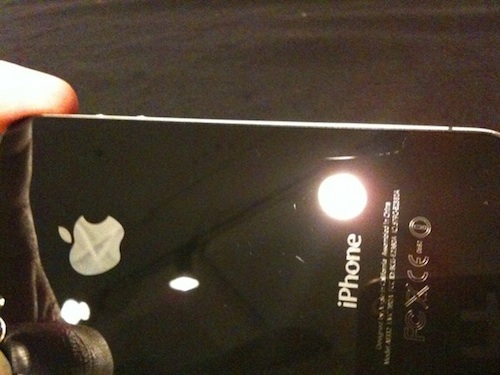 The photo you’re seeing above is our leader Joshua’s iPhone 4 review unit, snapped by Ryan Block just moments ago. Ryan pointed out that there are some nasty scratches on the back of the phone. While we don’t have any better photos of it at the moment, Josh told us that they’re hard to see unless in bright light, but they look pretty notable to us for a five day-old unit made of Gorilla Glass.

It is worth pointing out that Apple indicated that the iPhone 4 is more scratch-resistant and not scratch-proof. Existing iPhone 3G/3GS users know all too well how easy it is to scratch the back of their devices.

However, after only five days of use (and it’s difficult to gauge what kind of “use” this is), it is surprising to see scratches. For a device that is supposed to be more scratch-resistant, the iPhone 4 seems to slightly mimic the iPhone 3G/3GS in terms of scratching the back of the device.

This may be of concern to Canadian iPhone 4 buyers next month, but there are solutions to avoid scratches almost entirely. I know the first thing I’ll be purchasing after my iPhone 4 is the InvisibleSHIELD from Zagg.

So what do you think? Is the iPhone 4 really more scratch-resistant? Or is a full-body film protector the way to go?