According to a “top secret” internal document revealed during the ongoing Apple vs. Samsung patent infringement trial this week, Samsung sold half as many Galaxy Tabs as it claimed back in 2011, feeding wrong figures to the media and investors, AppleInsider reports. The documents clearly indicate that the company’s own public representation of its competitive position in the tablet market was not true and it released false statements about the Galaxy Tab sales. 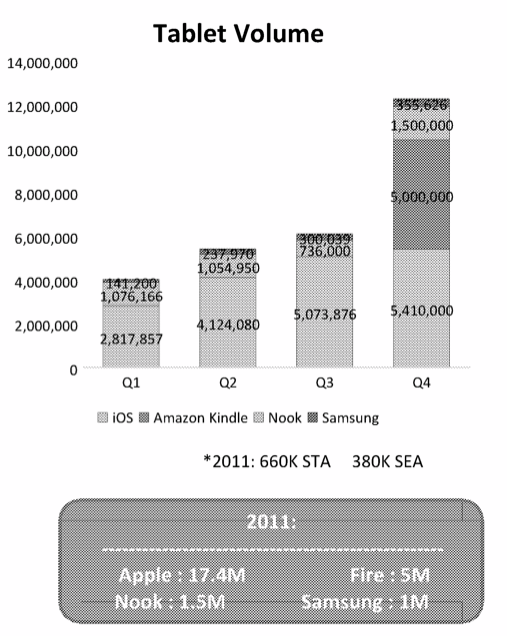 Philip Elmer-DeWitt from Fortune points out that following Samsung’s comments made to its investors regarding its tablet sales, dozens of reputed media outlets had reported that the company had shipped 2 million Galaxy Tabs, reducing Apple’s market share to 75% from 95% in less than six weeks. Interestingly, Philip had doubted the reports back then and today, it confirms that his assessment was spot on. “When Strategy Analytics was telling the world that Samsung sold 2 million Galaxy Tabs in six weeks, the truth was that it took Samsung all of 2011 to sell half that many”, he says.

Samsung’s tablet sales were behind the entry level attempts of a couple of bookstores to bang out a tablet device they could sell as a way to develop a market for ebooks. And Samsung not only had a year head start over them in building Android tablets, but also had a decades long legacy of building Windows tablets and all kinds of other hardware.

Samsung had quoted the 2 million figure during its quarterly earnings call with investors, not only misinforming the blogs but also deceiving the company’s investors that led them to think that the Korean company was enjoying strong tablet sales when it wasn’t.

American Express Canada and Metrolinx have just enabled tap-to-pay functionality on eligible PRESTO devices for GO Transit and Union Pearson (UP) Express in the Greater Toronto and Hamilton Area. Cardmembers can pay for their adult transit fare with a contactless-enabled American Express Card, mobile wallet, or payment-enabled smartwatch. To make for a seamless experience, Cardmembers...
Usman Qureshi
21 mins ago