How “Sent From My iPhone” Became a Key Internet Etiquette

When the iPhone was first introduced, the default “Sent From My iPhone” sign-off received plenty of criticism, and was considered a thinly veiled humblebrag among the growing popularity of Apple products. An interesting write up on The Guardian highlights how something which initially proposed that having an iPhone was so much more than having something on which you could make calls and browse the internet, has now become a key piece of net etiquette. 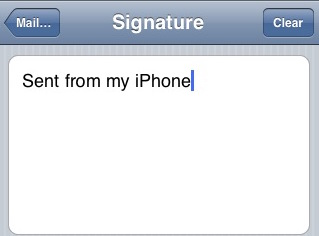 Apple’s default Mail app sign-off started of as “an elite lifestyle marker that signalled both sophistication and technological know-how”. However, it quickly became a little embarrassing, as it suggested that either you wanted to show off your smartphone or you couldn’t figure out how to turn the message off. Recently though, the sign-off is no longer accused of not knowing how to switch it off, or even a humblebrag. In fact, the phrase has become “an important part of online decorum”.

Including the sign off contains an innate apology for the brevity of the message. It begs forgiveness for any spelling or grammatical errors. It allows a little wiggle rooms for errant emojis. It is a nod of acknowledgement that you are on the hoof and doing as well as can be expected.

And it works. The researchers Caleb T Carr and Chad Stefaniak found in their paper Sent From My iPhone: The Medium and Message as Cues of Sender Professionalism in Mobile Telephony that those receiving a message containing spelling and grammatical errors forgiving of the mistakes when sent from a phone. What’s more,it boosted credibility over and above a perfectly worded message without the caveat.

Well who would have thought “Sent From My iPhone” would one day make users forgive errors attributed to the constraints of writing on a tiny touch screen, or as the source puts it, “a nod of acknowledgement that we are doing the best we can”.