Users who are a part of WhatsApp’s beta program have started seeing a new option that allows them to share their status to other apps, including Facebook, Instagram, Google photos, and Gmail, The Verge is reporting. Using the new feature users can post images, text, and videos on their profile that disappear automatically after 24 hours. 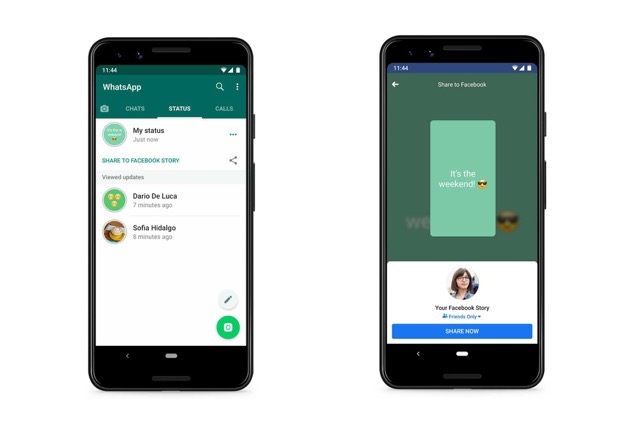 WhatsApp has, however, confirmed that this Instagram Stories-style feature does not rely on any data sharing with Facebook. According to WhatsApp, it is making use of the same data-sharing APIs as every other app and that the data is transferred only between the apps on-device.

WhatsApp is also not allowing the status to be automatically shared to Facebook or another service as the company wants the feature to be “an active decision” on the user’s part:


WhatsApp has to be careful about creating the impression of data sharing with Facebook. When Facebook acquired the messaging service back in 2014, WhatsApp promised that it wouldn’t share user data with Facebook and said that it would function “independently and autonomously.”

But as Facebook moves toward allowing users from all three of its major services to message each other across a single technical backend, even seemingly innocuous features like this can risk intense scrutiny.

WhatsApp Status is also set to become the first place in the popular messaging app to show advertisements in 2020.