Good news for us Canadians who have yet to order (or receive) their new iPhone 4. A quick visit to the Apple Canadian online store shows that iPhone 4 shipping estimates have been improved to 2 weeks from 3 on both the 16GB and 32GB models. And yes, still no White iPhone (seriously, why bother asking anymore?)

This comes a little over a week after U.S. shipping estimates were improved to just 5-7 business days(and it’s since been updated to now just 3-5 business days). It’s apparent that supply is starting to better meet demand which is good news all around. What isn’t good news is a rumour this morning that Foxconn is supposedly raising their manufacturing prices on it’s clients, like Apple, which could spell passed on price increases to the customer. 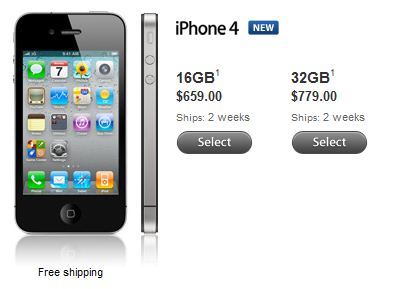 The story first broke late yesterday on Reutersafter a Citibank analyst made the claim. If true, the price increases will also affect Nokia, Microsoft and Sony Ericsson (why Dell isn’t mentioned is a mystery to me considering they too use Foxconn). This doesn’t necessarily mean Apple will immediately pass on the price increase but it’s doesn’t bode well if this proves to be true.