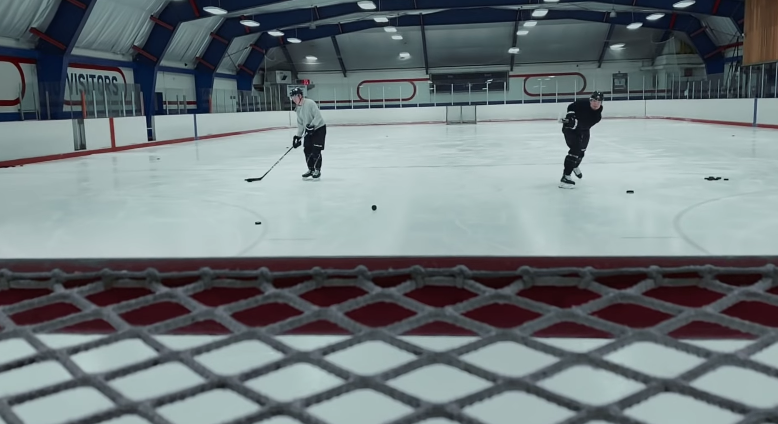 Earlier this year, the NHL and Apple together with SAP to provide iPad Pro models for coaches behind the bench, as part of a new partnership. It also resulted in a Shot on iPhone campaign with the NHL, with various billboards posted around Canadian cities and on Instagram.

This collaboration with Apple and the NHL has resulted in a new Shot on iPhone XS ad, featuring players from the Toronto Maple Leafs:

Auston Matthews, of the Toronto Maple Leafs, steps behind the camera to film his teammate, Mitch Marner. Get a peek behind the curtain into the lives of two of the biggest stars in the NHL.

Watch the short video below with Matthews filming Marner, offering a behind-the-scenes look at two stars from the Leafs, ending with mention of Rogers (UPDATE: Apple has suddenly pulled the ad from YouTube…we’ll repost it below if it gets re-uploaded:

Update: Here’s the ad below that was uploaded by an unofficial channel:

The Toronto Maple Leafs kick off game one of their 2019 Stanley Cup Playoffs run tomorrow, against the Boston Bruins, in a classic matchup of two ‘original six’ era teams.

Recently released iOS 16.3 has fixed an Apple Maps security bug that may have allowed some apps to collect user location data without permission, 9to5Mac reports. Last week, Apple released iOS 16.3 and iPadOS 16.3 with a bunch of new features including: Support for physical security keys as part of the two-factor authentication sign in...
Usman Qureshi
6 mins ago

Apple has launched MLS Season Pass globally on the Apple TV app, ahead of the 2023 season that kicks off on February 25, 2023. An MLS Season Pass will provide fans all MLS and Leagues Cup matches, plus hundreds of MLS NEXT Pro and MLS NEXT games as well. Apple says there’s some free on-demand […]
Gary Ng
31 mins ago

Anker has finally broken its silence on the eufy Security fiasco. eufy is Anker's privacy-centric smart home security brand, which landed in scalding hot water after its always-encrypted, local storage-only surveillance cameras were found to be streaming unencrypted live footage that could be accessed through a simple media player. Responding to many calls for answers...
Nehal Malik
33 mins ago