Steve Jobs, KBE?–Maybe, If It Wasn’t For Gordon Brown

Sir Richard Branson. Sir Elton John. Steve Jobs, KBE–err, what? That’s right, Steve Jobs does not have an honourary knighthood but he would if it wasn’t blocked by British Prime Minister Gordon Brown.

The latest report from The Telegraph states that Jobs was scheduled to be knighted but was ultimately denied by the former British PM. Why?

The then-Prime Minister refused to knight Mr Jobs in 2009 because he turned down an invitation to speak at the Labour Party conference, a former senior Labour MP said.

…The former MP was told by Downing Street that the decision was related to a failed attempt to attract Mr Jobs to Labourâ€™s annual conference. Given his status as a superstar of business and technology, such an appearance would have been viewed as a coup for Mr Brown.

Of course, a spokeswoman for the former PM has denied these claims.

Bill Gates and Bono from U2 are knighted, and it would only be fitting that Steve Jobs, the tech revolutionary of our time join this honourary club. I’m confident it will happen soon in the near future. Don’t you agree? 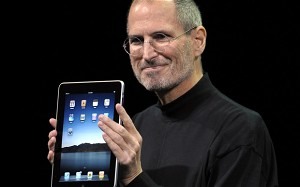