An unofficial ‘Hey Siri’ website accessible at Hey-Siri.io has put up a huge list of Siri commands for iOS or macOS (beta), neatly organized in categories in English and German languages (via 9to5Mac). 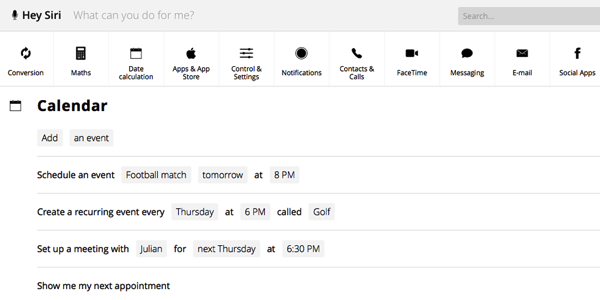 There are nearly 500 Siri commands on the website with more than a thousand variations, broken down into 35 categories such as HomeKit, People & Relationship, Books, Definitions & Search, Notifications, Time and Music.

Since Apple continuously adds new features and capabilities to the voice assistant, the list is sure to entertain you with quite a few things you didn’t know Siri could do. And with Siri coming to Mac starting with macOS Sierra, the list is now even more useful than ever.

Which Siri commands do you use most often?