Voice-based assistants like Siri are a useful way to use your phone hands-free, as well as often being faster than typing or tapping, yet Apple might one day let you use iMessage to type messages to Siri instead. 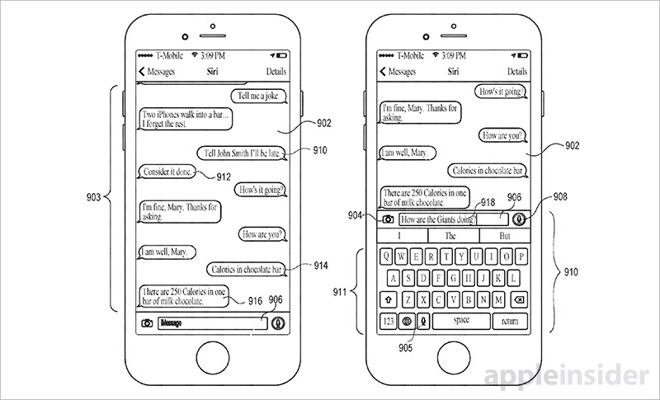 According to a report from AppleInsider, a new patent application published by the Unites States Patent and Trademark Office shows a new Apple service in which users could ask questions and chat with the Cupertino company’s AI assistant Siri through iMessages. Similar to a trademark filed last year with the same office, this one now includes deeper integration with image files, video, and audio.

The patent employs some dense language, but it helps provide a more clear idea on how the feature would function in regular use:

The “Intelligent Automated Assistant in a Messaging Environment” could respond to text, audio, images, and video when sent to it by the user, which Apple said would result in “a richer interactive experience between a user and a digital assistant.”

The patent gives a few examples of a conversation held between Siri and a user in Messages, with the user asking questions regarding calorie content in food, upcoming meetings, and even asking Siri to text a friend.

Your interactions with Siri would be displayed like any other instant messaging conversation, with text bubbles for both your questions and Siri’s replies – so, importantly, Siri would give a written rather than spoken response as well.

It only remains to be seen whether this sort of integration will make its way to iOS 11. WWDC 2017 is next month, so we’ll find out soon enough.