Apple has responded to the new Google Now in Android M with a more advanced version of Siri in iOS 9 with “proactive” personal assistant features at the recent WWDC event and already, the folks over at CNET have pitched the two upgraded virtual assistants head-to-head with each other in a new comparison. While some overlap exists between the new capabilities in Google’s Now and Apple’s new Siri, the source claims that the next-gen Siri seems to excel at most of the original features. 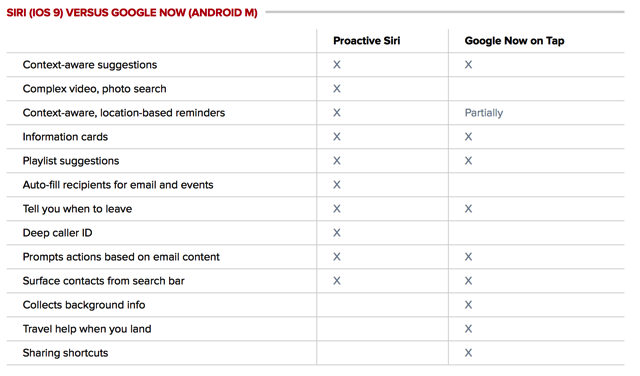 According to CNET, Siri in iOS 9 will bridge the features gap between it and the next version of Google Now. For instance, Siri surfaces “cards” that tell you the weather, sports scores, stocks, calculations and conversions, something that Google Now already has. However when it comes to searching contacts by name, Siri streamlines it further by also making it easy to launch a phone call or text message.

“Once their new versions are released, Google Now and Siri will both offer some additional information when you call up their search functions. In iOS 9, that takes the form of Siri Suggestions of favorite apps you might launch or people you commonly call. Siri will also shortcut you to nearby places and headline news.

In Google Now on Tap, the suggestions feature will dish up relevant actions or details pertaining to what’s on the screen. That could equate to presenting buttons for sharing a story through social media or creating a reservation if an email mentions a restaurant.”

While matching up features of the two will do for now, for the real showdown however, we need to wait until fall when the two launch in their fully developed forms.