Apple will allow iPhone and iPad users to control third-party app functions using Siri for the first time in iOS 10, which is set to be released to general public this fall. The Wall Street Journal has published a detailed preview of Siri and third-party app integration in iOS 10, going hands on with apps like WhatsApp, LinkedIn, Pinterest, Square Cash and Slack, among others. 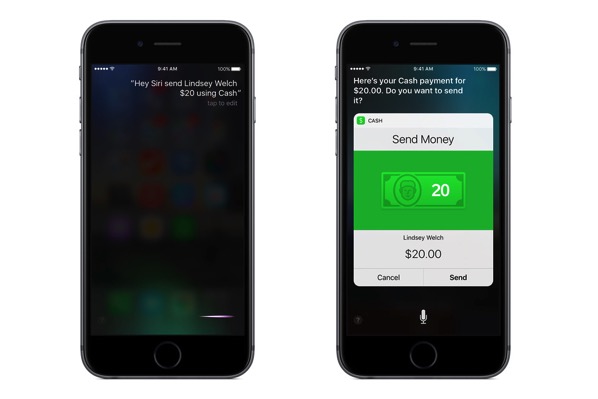 WSJ found the new features in iOS 10 make Siri a lot more useful in everyday life. “The Siri commands I saw in action centered around mobile payments, image search and messaging. I could say, “Siri, send Catherine $20 for lunch with Cash,” and the Square Cash app would transmit the funds.” For security reasons though, Touch ID is still required to complete the transaction. Similarly, saying “Hey Siri, send Jim Gonzalez a message in LinkedIn” sends a direct message to a contact via the Microsoft-owned social network.

For chat: LinkedIn, WhatsApp, WeChat and Slack. If you can’t remember someone’s full name, Siri can help. For example, say “Hey Siri, I want to send Michael a LinkedIn message,” and Siri will list all the Michaels you’re connected to in that network, and ask you which one you meant.

For photo search: Pinterest, Vogue Runway, Looklive, The Roll and Pikazo. Once the photo-search results show up, you can tap any thumbnail to open the related app. Photo-search commands can include contents of the images, as well as when they were taken. For instance: “Hey Siri, show me my best photos of sunsets taken last summer using The Roll?”

Looks like Siri is finally getting where it should have been right from the start. To learn more about Siri in iOS 10, hit up the source link.