Siri is being accused of having an antiabortion agenda — at least in New York City and Washington, D.C.. When asked where to get an abortion, the beta personal assistant only produces results for pro-life centres or tells users that it has no knowledge of abortion clinics. 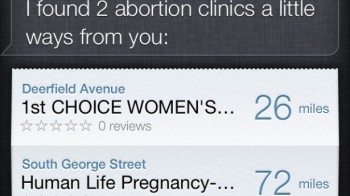 Megan Carpentier, executive editor of The Raw Story, reports that Siri users in the Washington area are directed toward antiabortion pregnancy centers in Virginia and Pennsylvania instead of the nearby Planned Parenthood. Ask in New York City, and Siri will respond: “I didn’t find any abortion clinics.”

The Raw Story also reports that when a reader asked, “Why are you anti-abortion, Siri?” the app answered, “I just am.” There is no corresponding screenshot to substantiate this claim.

So far, Apple hasn’t responded to media inquires, so it’s unknown if it’s just a technical glitch or a deliberate omission on Apple’s part.

Norman Winarsky, one of the founders of Siri, told the New York Times that Apple is likely not to blame. “Those answers would be coming from the Web services that Siri is connecting to, not necessarily Apple,” he said. Having said that, Winarsky was quick to point out that he had no knowledge of what modifications Apple might have made to Siri after acquiring it in 2010.

In Canada, Siri is unable to perform geography-based searches, so I’m unable to duplicate results.

Update: The NYT has received a response from Apple. Quoting from the source:

The company attributed the problem to kinks in the product that are still being ironed out. Siri is officially still a beta or test product.

“Our customers want to use Siri to find out all types of information, and while it can find a lot, it doesn’t always find what you want,” said Natalie Kerris, a spokeswoman for Apple, in a phone interview late Wednesday. “These are not intentional omissions meant to offend anyone, it simply means that as we bring Siri from beta to a final product, we find places where we can do better and we will in the coming weeks.”

Google on Thursday shared a teaser video for its first smartwatch, dubbed the Pixel Watch, ahead of its expected announcement at a launch event confirmed for October 6. Check out Google's full Pixel Watch teaser below: https://www.youtube.com/watch?v=_p7v1PTABSU The teaser introduces us to the design of Google's oft-rumoured smartwatch against the backdrop of some thumpy music,...
Nehal Malik
9 hours ago