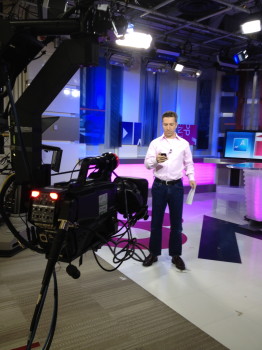 Michael Hainsworth has been a daily fixture on television sets since the beginning of the new millennium, bringing the day’s top business stories to viewers as an anchor on BNN, and on CTV evening newscasts across the country.

As co-host of App Central – alongside social-media guru Amber MacArthur, Hainsworth has been sharing the best and latest in tech gadgets, devices and the apps powering them.

While Hainsworth’s knowledge and savvy of all things tech (and business) is on display for all to see pretty much seven days a week, I got the opportunity to turn the tables on him and catch a glimpse of what makes this tech-geek at heart tick.

One app you can’t live without 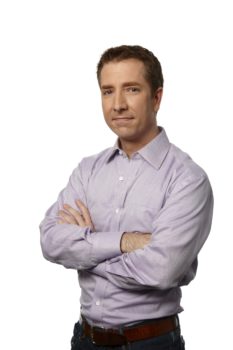 Facebook. I’m quite the anti-social individual in person (also known as “shy”) but it’s a whole different world online. Facebook becomes infinitely more valuable in a mobile environment – that is assuming I leave the house. When I do, the ability to instantly upload a photo while out and about ensures I never forget to share moments with far-flung family and friends.

One feature you hope will be on the, or are looking forward to, on the iPhone5

I’m hoping, but not expecting, the iPhone 5 to include widgets. The Samsung G3 has found weak spot in my “Apple Armour”, and the Android feature is a no-brainer. The ability to quickly view the weather, my recent email messages, and even the expected commute time to work all at a glance makes the iOS look positively archaic.

The feature I’m expecting in the iPhone 5 is NFC. Near Field Communication will allow me to ditch my debit and credit cards and wave my handset at the cash register to pay. I’m looking forward to perfecting my Obi Wan Kenobi-esque Jedi hand wave: “These are not the lattes you’re paying for.”

Most memorable moment on App Central

Crashing the Parrot AR Drone 2 HD just hours before taping The Big Show stands as my most memorable App Central moment to date. After several timid flights in my backyard, I decided it was time to see what this thing could really do. I removed the altitude limiter, and punched it like Chewbacca after fixing the hyperdrive. Fearing the drone would get stuck in a tree, I walked to the center of a soccer field in my neighbourhood. The drone made it about 75 feet into the air before a sudden gust of wind sent it careening toward a 100 year old oak tree. The AR Drone has two important buttons: takeoff/landing and “emergency.” Fearing a fall from 75 feet, I hit the “landing” button. As the rotors’ torque eased, the wind won: lodging the drone well out of reach of even the most nimble tree climber. I called my arborist and pleaded with them to bring a cherry picker to retrieve the wayward $329 toy. $250 and two hours later, it was safely back in my hands. And because the AR Drone HD 2 sports a high definition camera, I caught it all on video: http://www.hainsworth.com/2012/06/drone-crash-recovery/

Earphones of choice for the iPhone

A good friend insisted my white earbuds were insufficient to fully enjoy my music. I didn’t believe him until my Apple issued 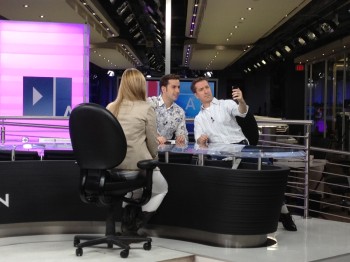 headphones were destroyed in a Mysterious Briefcase Tangling Incident. I did the research and concluded the Bose MIE2 headphones with a dedicated iPhone in-line microphone and volume controls were what’s best for me. My friend was right: the fidelity of the Bose buds far outpaced those provided by Cupertino. The bass is richer and the high-end is clear without being piercing. The rubber buds that wrap into your ear are more comfortable than the custom broadcast earpiece I wear on-air every day.

Have I told you about my experience with the Parrot AR Drone 2 HD? I just now need to figure out how I can justify to Wifey the $329 cost. You know a toy is fragile when the company that makes it prominently displays on their home page links to buying parts. Parrot sells every single piece of the drone as a separate product. You could go all Steve Austin: Six Million Dollar Man on your drone over time. I still haven’t figured out if it’s more stressful to fly a media review unit that you didn’t pay for, or to fly one that took 300 bones out of your pocket – plus repairs.

Moment you knew tech would change your child’s life forever

My daughter has her own iPad. Technically, it’s my first generation unit handed down to her after I upgraded to the more recent model. She required zero instruction on how to use it. I interviewed a developer who had been writing children’s programs for 20 years. He tells the story of working on a program in the early days for the PC and sitting a child down to test it. They skipped over the keyboard and mouse, and immediately climbed up onto their knees to reach over and touch the screen. It’s such a natural way to interact with technology. And with Olivia mastering the device in minutes, it was clear to me her perception of technology was positive: a friendly and intuitive way to operate an incredibly complex tool.

The educational apps for children are fantastic – it’s helped her with reading, spelling and arithmetic. Giving my six year old an iPad has also taught her about patience and money: she gets a new paid App only on Saturdays as part of her allowance. The more expensive the app, the less cash she gets in return for her basic chores. So far she hasn’t found an app for making her bed and cleaning her room – but I’m sure she’ll find one eventually.