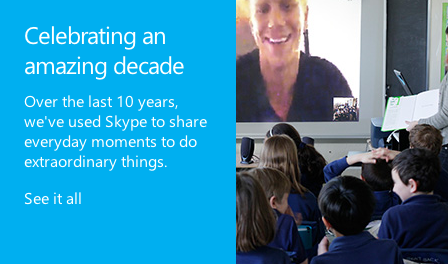 Skype is celebrating its 10th anniversary by giving away free Wi-Fi to all of its users via its more than two million Skype WiFi partner hotspots.

It’s our anniversary, but you get the present. Each and every Skype user will receive, as of today, 30 minutes (two connections of up to 15 minutes each) of free WiFi at any of our two million Skype WiFi partner hotspots. The offer begins at 12:00 AM on August 29 and ends at 12 AM on August 30.

You can use your 30 minutes at any time over the next month – just join a supported WiFi network and use Skype WiFi to connect. Go to any hotspot, select “Skype WiFi,” sign in, and go. Enjoy!

As for Skype Premium users, they will get free Skype WiFi access for the rest of August (which is only a few more days).

Click here to sign up for a Skype Premium account, where for just $2.99 per month you can start making unlimited calls to landlines and mobiles in Canada and the USA, right from your iPhone, iPad or Mac/PC.