Are you a Skype enthusiast? If you are, today is going to be a happy day, unless you’re a Canadian iPhone user! We first experienced Skype on the iPhone via Fring, which was available only to jailbroken iPhones. Once the App Store launched, we ended up with the official Fring app, with another alternative called Nimbuzz.

Well, as of today the official Skype app for iPhone should be available for download, but not in Canada. iPhone users in Japan got their hands on the app before anybody and many have been quite pleased. Almost every feature of Skype on your computer will be available on the Skype iPhone app.

Whoa, hold up. So Canadian Users Are Shut Out of the Skype App? Why?

The Skype for iPhone App is going to be available in EVERY country that has an iTunes Store, EXCEPT FOR CANADA! When I read about this on the CBC website (thanks ChantelleJoy!), I was flabbergasted and laughed out loud. It seems inherently Canadian to be shut out of the latest things, doesn’t it?

We had to wait a year for the first gen iPhone (so did everybody else, but it hurt us the most since were are neighbours with the USA). When I was growing up I remembered not being able to find certain toys, video games, clothes, CDs, etc in Canada. It just wasn’t possible so road trips down South were very common. Gee, things haven’t changed, have they?! 😉

Here’s an excerpt from the CBC article:

Chaim Haas, a public relations representative acting on behalf of Skype, said the application is available in every country in which the iPhone is on sale and in which Apple has an iTunes Store — with the exception of Canada.

Haas said this is because of patent-licence restrictions but would not elaborate except to specify that it is a patent issue related to Skype, not Apple.

So there you have it, the reason why we don’t have the Skype iPhone app is because of a patent issue. It has nothing to do this time with either Rogers or Apple.

However, the article also states that “CRTC regulations require phone service operators to offer enhanced 911, which allows the operator to find the location of a caller.” This is the reason why SkypeIn is not available in Canada. It could also be another reason why Skype is not in Canada for the iPhone.

Click here to send the Skype team a friendly message from Canada, demanding that they release the app for Canadian iPhone users!


Still want the Skype app? All you have to do is create a US iTunes account. Once you’ve done that you can enjoy the app. I downloaded the Skype app and despite troubleshooting with it for 15 mins, I could not get past the start up screen. The app would crash every time I touched a field that required the iPhone keyboard.

**EDIT**: Looks like all you have to do is update MobileSubstrate via Cydia to bypass the constant crashing on jailbroken iPhones. Thanks @reneritchie for the tip!

So it looks like my Skype for iPhone review will have to finish up later when the app is updated to quash these bugs. Until next time, enjoy the following screenshots of my progress (it does look pretty!): 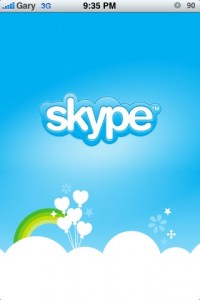 John Biehler has a great video demonstrating the Skype app. Watch below and get ready to be dazzled:

If you’ve managed to download the Skype app via a US iTunes store, I’d love to hear your experiences with it so far. Any crashes? How is the call quality compared to Fring/Nimbuzz? Leave a comment or head to this thread in the forums!