Looks like Skype has updated their iPhone app to finally allow calls over the 3G network! Currently, the only way to make 3G calling was to jailbreak your phone and install 3G Unrestrictor or VoIPover3G. The latest Skype iPhone app update brings the following new features:

– Call using your 3G connection. Skype-to-Skype calls on 3G are free until at least end of August 2010, after which there will be a small monthly fee (operator charges for data will still apply).
– Near CD-quality sound for Skype-to-Skype calls using wideband audio (SILK codec) on iPhone 3GS and 2nd generation iPod touch.
– Enhanced call quality indicator.
– Improved start-up time.
– Fast access to the dial pad from iPhone home screen. 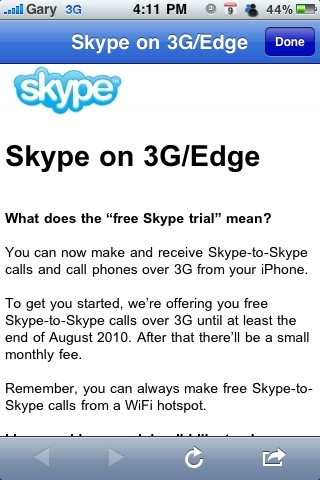 It’s too bad Skype to Skype 3G calls are only free until August 2010 though. I wonder what the charge will be after that.

Want to save from getting hosed long distance charges from the Big 3 in Canada? Just purchase a Skype subscription plan for $3/month. This lets you make unlimited calls to Canada/USA! Now that Skype works over 3G, you won’t need to jailbreak your phone to utilize this amazing plan. I use it all the time to make long distance and local calls. Why pay $0.30/minute to Rogers?! You can also add a caller ID too!

Click here to check out the Skype monthly subscription plans.

Thanks to everyone who sent this in via twitter!