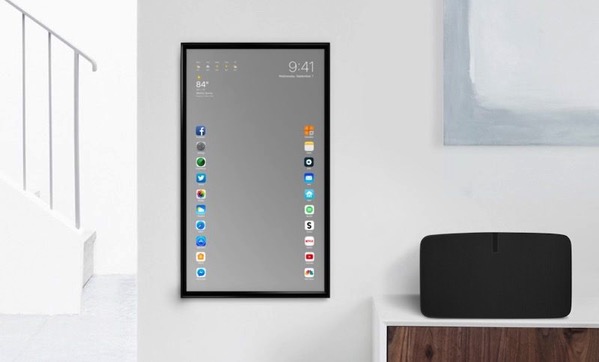 New York-based web developer and graphic designer Rafael Dymek has built a fully functioning touchscreen smart mirror called the ‘Apple Mirror’, which gives us an idea of what we might get if Apple ever starts making smart screens for the home (via MacRumors). The developer created the mirror as a personal project using elements of iOS 10 to augment the interface, which appears to run off the back of a modified desktop touchscreen OS.

The “Apple Mirror” features the date and time in the top right corner and a weather forecast in the top left. Beneath these sit several working iOS app icons which can be rearranged with the drag of a finger.

A tap opens the apps in the familiar manner, albeit in a windowed mode, although this does allow for easy multi-tasking. Dymek demonstrates some of the possibilities of his modified Apple interface, which include the ability to request an Uber, watch Netflix, read the news, control a Nest thermostat and smart light bulbs, control output to a Sonos speaker system, and more.

The Apple Mirror’s interface goes to sleep and the touchscreen looks like an ordinary mirror after 45 seconds of inactivity, while a simple tap resumes use.